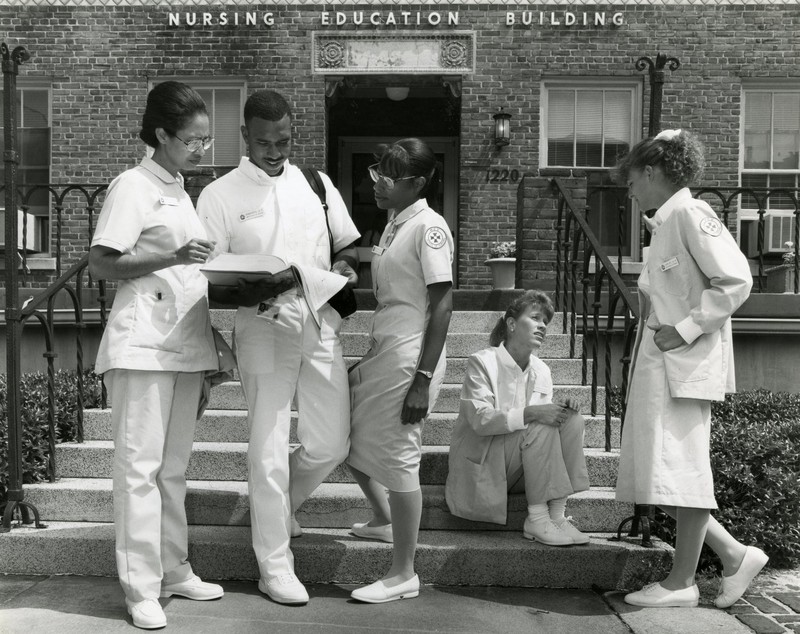 1990 Peer Assistance Memorandum of Understanding
The VNA, the Virginia Department of Health Professions and the Virginia Board of Nursing signed a memorandum of understanding which provided an opportunity for an eligible registered nurse to continue to practice without action by the Board of Nursing as long as the individual was compliant with the requirements of the PACDN contract.

1991 Eight Hundred Nurses Walk to the Capitol
At the Sixth Annual Nurses Day at the Legislature over 800 nurses walked as a group the six blocks from the meeting site in Richmond to the Capitol. Governor L. Douglas Wilder and Delegate Mary Marshall greeted the group. The purpose of the walk was to meet with members of the General Assembly and to urge them to support the bill to grant prescriptive authority to nurse practitioners.

1991 Virginia Celebrates National Nurses Week
For over twenty years, nurses and nursing organizations in Virginia had honored the profession at various times with day and week-long recognitions. Following the lead of the American Nurses Association, Virginia nurses adopted the week of May 6-12 as the “Week of the Nurse in Virginia.”

1991 Nursing Scholarship Fund Established
An amendment to the Nursing Practice Act in 1991 created a Nursing Scholarship Fund to be administered by the Board of Health. The Board of Nursing was authorized to charge a fee of $1 for licensure of every LPN and RN to be deposited in this fund. For the first time, scholarship money was made available to practical nursing students in the Commonwealth. Delegate Mary Marshall sponsored the bill establishing this fund. Following her death in 1992, the Boards of Health, Health Professions and Nursing voted to honor Marshall by naming the scholarship in her memory. 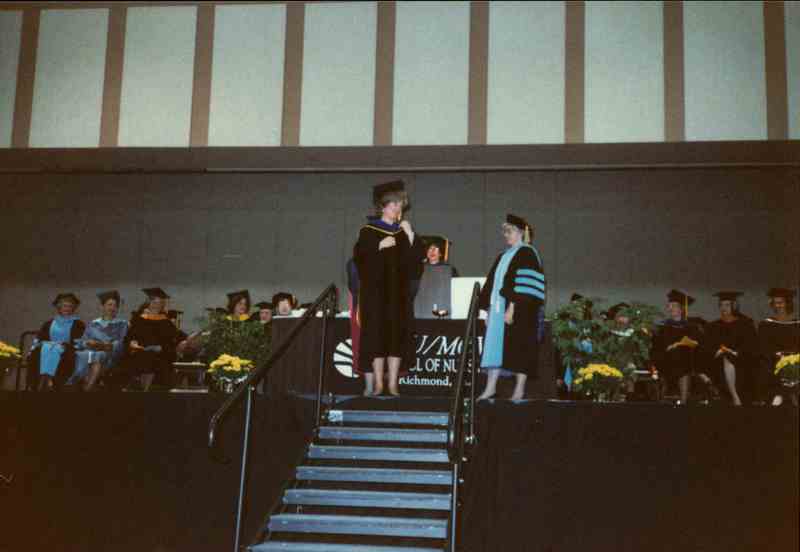 Joan Donova, Class of 1990. First PhD Graduate of the School of Nursing.

1992 Prescriptive Authority Regulations Adopted
As a result of amendments to the Medical and Pharmacy Acts, the Boards of Medicine and Nursing adopted regulations granting prescriptive authority to licensed nurse practitioners which became effective in August, 1992.

1992 Clinical Privileges for Nurse Midwives
Virginia law was amended to pave the way for certified nurse midwives to obtain clinical privileges in hospitals.

1993 Board of Nursing Membership Expanded
Four members were added to the Board of Nursing including two registered nurses, one licensed practical nurse and one citizen member for a total of thirteen members. 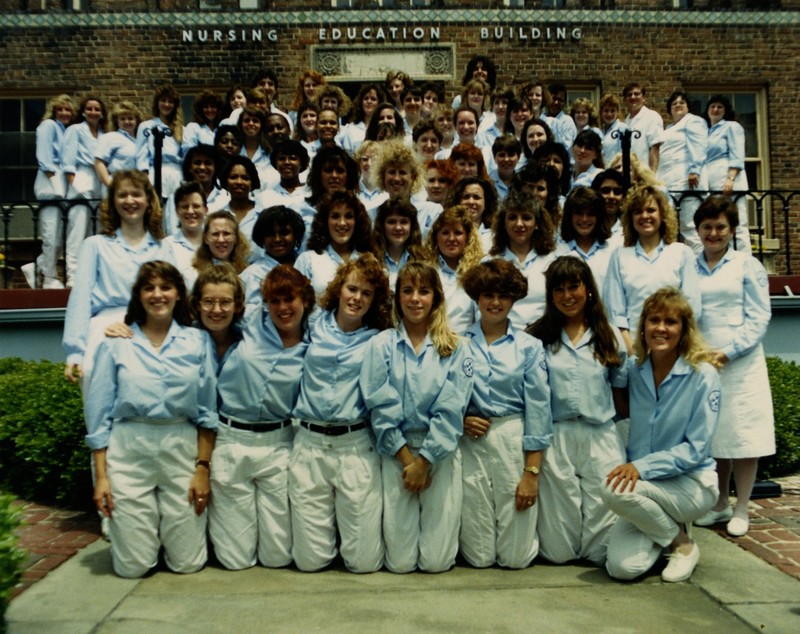 1993 VNA Receives Critical Assistance Loan from ANA
After years of recovery from deficit spending in the 1970s and early 1980s, the VNA was finally on a firm financial footing when the VNA bookkeeper was convicted on charges of grand larceny for her embezzlement of VNA funds. Under the strong leadership of the Board of Directors, careful management by the Executive Director and a critical assistance loan from the ANA, all debts were paid and the Association had a balanced budget.

1993 Termination of Virginia Society of Professional Nurses
The VSPN was terminated in 1993 when a letter was sent to the remaining members advising that there was not a sufficient level of support to sustain the organization and it was disbanded. 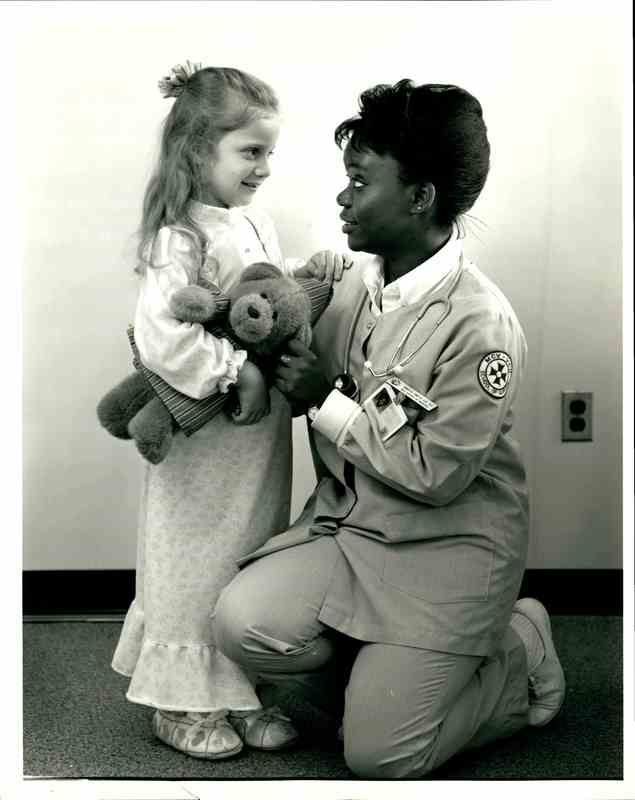 1994 Nurses in Public Schools
An amendment to Virginia law required the Board of Education to monitor progress of local school boards to employ or contract with nurses at specific ratios. The legislation did not mandate the hiring of school nurses.

1996 Nursing Practice Act amended to include Massage Therapists
The authority of the Board of Nursing was expanded to include the regulation of massage therapists.

1996 Nursing Report Card Quality Indicator Project
The VNA received a grant from the American Nurses Association to initiate the Nursing Report Card Quality Indicator Project with matching funds and in-kind services provided by Winchester Medical Center, VNA, Virginia Nurses Foundation and Epsilon Zeta Chapter, Sigma Theta Tau International. The project is a pilot study to identify the feasibility of collecting specific types of outcome data for hospitals in rural areas of Virginia, with eventual extension of the model plan to both rural and urban areas of the state.

1996 Virginia Nurses Today Changes Format
The official publication of the VNA was issued in a new tabloid or newspaper format and was distributed to all registered nurses in Virginia for the first time.

1996 Changes in Law Affecting Nursing
At the request of the Board of Nursing following a recommendation made by the Virginia Association of Colleges of Nursing, the Nurse Practice Act was amended to exempt from licensure a registered nurse who holds an equivalent credential in a foreign country in order for the individual to participate in the clinical component of an advanced professional nursing education program. In the same year the medical Practice Act was changed to authorize a registered nurse to pronounce death under certain circumstances.

1998 Peer Assistance for Chemical Dependence
Legislation in 1997 established a Health Practitioners’ Intervention Program (HPIP) for all persons licensed, registered or certified by the twelve boards with the Department of Health Professions. The program began operation on January 1, 1998. The monitoring function of the (PACDN) was no longer necessary. With a strong commitment to continue helping nurses with substance abuse problems, a new group called the Virginia Peer Assistance Network (VPAN) was created to replace PACDN. The members of the VPAN advocate and support recovering nurses to retain the basic purpose of the PACDN while relinquishing the activities now available through HPIP.

1998 Centennial Committee Appointed
The president of the VNA appointed a Centennial 2000 Committee to plan for the VNA Centennial, a Celebration of Nursing in Virginia to educate, invigorate and increase the visibility of the profession in Virginia.

1998 Delegation of Nursing Authorized
The Nurse Practice Act was amended to allow the registered nurse to delegate selected tasks and procedures to appropriately trained unlicensed person under regulations promulgated by the Virginia Board of Nursing. The change was made following several years of study and in response to concern for public protection at a time of increased use of unlicensed persons in the care of patients in Virginia.

1999 Centennial Celebration Honors 99 Outstanding Nurses
The VNA and the Virginia Nurses Foundation sponsored a gala dinner on May 7, 1999 to honor 99 Outstanding Nurses. These nurses were recognized for unusual contributions to nursing and to the health and welfare of Virginians.

1999 Centennial Celebration at VNA Annual Meeting
Patricia Donahue, Nursing Educator and Author of Nursing: The Finest Art, was keynote speaker at the 1999 VNA Convention. Other speakers, posters, movies and displays carried out the Convention theme - Celebrating the Past: Looking Back Into the Future.

1999 Virginia Partnership for Strategic Planning in Nursing
The Virginia Partnership for Strategic Planning in Nursing (VA Partnership), an outgrowth of more than 20 years of nursing collaboration through the Alliance of Nursing Organizations and Specialty Nursing Groups, was organized in 1999. This expanded partnership includes consumers, health care industry and business leaders. The project goal was to develop a nursing workforce to meet the needs of Virginia in the 21st century.

1999 Hall of Fame Authorized
The Delegate Assembly at the VNA Convention in 1999 adopted a resolution that authorized the VNA to inaugurate and induct the first honorees in the Virginia Nursing Hall of Fame during the Week of the Nurse Celebration in 2001.