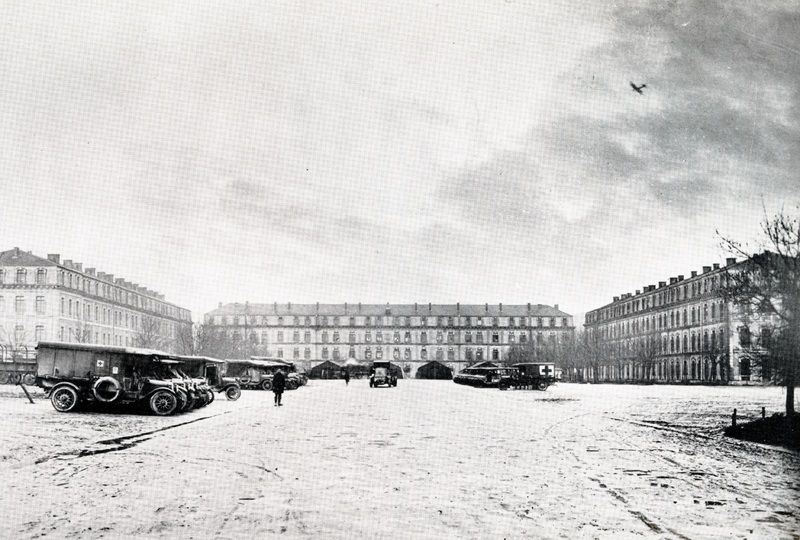 General View of Base Hospital No. 45 at Toul

"The Caserne La Marche was a huge barracks consisting of three large four-story main buildings and numerous smaller outbuildings, all enclosed within a high wall. The grounds were quite spacious, the main buildings forming three of the side of a quadrangle used for the maneuvering of the infantry who had previously occupied the place. Here, almost empty handed, we began, while we worked over the sick men around us, to build our home and our hospital. When we were done we had within those walls a little world to itself. The volume of administrative work was very large. Separate offices had to be set apart for the heads of many departments. There were three operating rooms and separate quarters for the x-ray service, the dental clinic, the eye, ear, and throat clinic, the laboratory and the dispensary. There were also a morgue, a sterilizing plant for delousing clothes, an incinerator, a laundry, an animal house for the laboratory, a guard house, a barber shop, a tailor shop, a butcher shop, one large and several small kitchens, a post office, a post-exchange, sleeping quarters, mess halls, rest rooms, a circulating library, a Masonic Club room, bath houses, and several large warehouses containing subsistence, medical supplies, and quarter master stores. And then as the axis of the whole establishment, the wards occupying nearly eight full floors. We had electric lights but no other modern conveniences—no elevators, no heating systems, no water system, no sewage system."