The Influenza Pandemic of 1918-1919 is the deadliest event in human history, infecting an estimated 500 million and killing approximately 50 million people worldwide. The pandemic consisted of three waves. The first wave began in March 1918 with an outbreak among soldiers at Camp Funston, near Fort Riley in Kansas. The virus quickly spread through overcrowded camps and infected soldiers carried it to the eastern U.S. and then on to France. Within four months of its appearance in the U.S., the flu spread worldwide.

From September through November, influenza spread rapidly causing seemingly healthy people to fall seriously ill in the span of a few hours. The most susceptible population to this particular influenza virus, healthy adults ages 20-40, were at that time being transported over thousands of miles in cramped ships and railcars and placed in overcrowded camps and trenches. This created a perfect breeding ground, ensuring that the virus would spread.

The Meuse-Argonne Offensive, which lasted from September 26 to November 11, was severely jeopardized due to the pandemic. Camp quarantines and suspended draft calls meant the number of replacement troops needed to sustain the offensive was cut by nearly half. In many towns and cities in the U.S. public venues such as schools, churches, and theaters were closed to prevent the further spread of the disease.

The epidemic lessened in late November, but began to pick back up in December. This third wave of the pandemic peaked in March-April 1919. It even infiltrated the Paris Peace Conference and sickened some at the conference, including U.S. President Woodrow Wilson. 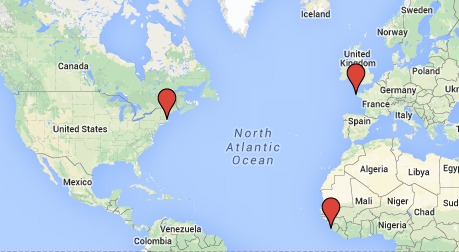 Locations of the origins of the second wave of influenza