Through the course of the war, new surgical techniques were developed to deal with the massive wounds inflicted by modern weaponry. During the Spanish-American War soldiers were equipped with an antiseptic power to use when treating wounds. The debridement technique developed during World War I included the antiseptic power as part of the treatment process. Debridement was used to treat large wounds. The wound was carefully opened, cleaned for damaged tissue, flushed with sterile solution, and treated with antiseptic powder. It was left open for a few days before being stitched closed. The technique was remarkably successful, but it fell out of use until the middle of World War II.

The rigors of trench warfare were unimaginably difficult for soldiers to handle, and for many it was too much. After weeks of constant bombardment, fear of gas, and heavy combat, many men would mentally shut down, becoming anxious, jumpy, and unwilling to fight, among other symptoms. This new condition called “shell-shock” was poorly understood. By the end of the war, the prevailing wisdom was that the condition had a physical cause. This led to several misguided surgical and medical interventions that may have caused more harm than good. Today, we recognize shell-shock as a manifestation of Post-Traumatic Stress Disorder (PTSD), a psychological phenomenon. 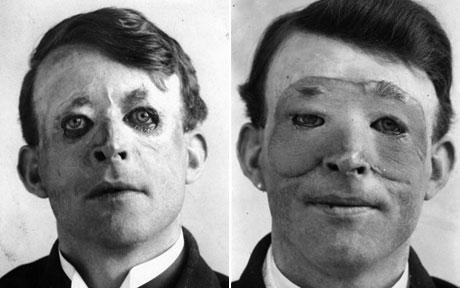 The Great War also saw the advent of reconstructive plastic surgery. Walter Yeo, sailor injured in the Battle of Jutland, is considered the first person to undergo plastic surgery.