Among the many important and fascinating people who figured in the life of James Branch Cabell, there are few whose influence was more greatly felt than Louisa Nelson. Born an enslaved person around 1820, Mrs. Nelson came to Richmond with her third husband, Jeremiah Nelson, after the war. Following his death, she became a nurse to the three young Cabell sons, James, Robert and John. She would live with the family for twenty-five years, until her death in 1904.

Louisa Nelson was a remarkable woman whose life bridged both time and cultures. While at that time she would have been labeled a “mammy,” a term that is distasteful to modern readers, it is clear from Cabell’s accounts and from her obituaries that she was held in great esteem and affection by both the white and black communities. Indeed, it was a mark of her status that she was addressed by the Cabells as “Mrs. Nelson” (not the more familiar “Louisa”), and by those in the African American community as “Sister Nelson.”

Mrs. Nelson was an authority figure, much like a British nanny, and her devotion to “her children” was complete. To James Branch Cabell she represented the ideal of unconditional love, but without sentimentality. Mrs. Nelson was stern and demanding, a proud woman who maintained her own rooms on St. James Street--and thus a degree of independence. As was typical in the 1880s, she would take her young charges to Monroe Park, where she would visit with other nurses while the children played under what Cabell once called their “uncompromising surveillance.”

“…when you played in Monroe Park, you had to be careful not ever, upon any imaginable pretext, to get your nice clean linen suit messed up; because, otherwise, you became just the most aggravating child that ever was.” (Let Me Lie, p. 183)

James Branch Cabell devoted an entire chapter to Louisa Nelson in his collection of essays, Let Me Lie. Cabell wrote “she was by me regarded with an affection which, during some sixty years of research work, I have not found any other person to merit.” (p.185)  He remembered her as an intercessor—standing between her children and any corporal punishment that parents might discuss.

Cabell also dedicated his novel, The Cream of the Jest:  To Louisa Nelson “At me ab amore tuo diducet nulla senectus.”  The Latin phrase translates roughly as “But never shall old age stop me from loving you.”

As the boys grew to men, Mrs. Nelson’s role in the household changed and she now became maid and friend to their mother, Anne Cabell, though always “on her own terms.”  She was an active member of the Shining Star Lodge of the Independent Order of Good Samaritans and Daughters of Samaria (a temperance society); and also a member of the Independent Order of St. Luke, an African-American fraternal order and cooperative insurance company.

As Louisa Nelson’s health failed, she was cared for in the Cabell home. Her death on February 7, 1904 was marked by glowing tributes in both the white and black Richmond newspapers. Her funeral was held in the First African Baptist Church (301 College St.). James, Robert, and John Cabell and three of their cousins served as pallbearers. Anne Cabell’s tribute to Mrs. Nelson was published in the local paper.

Those whom she served and her friends feel there is no honor too great to do her justice: no tribute of which she is unworthy, and that God whom she so worthily served will reward her accordingly.

After the funeral, another tribute in the The Richmond Planet noted,

In sister Nelson’s death and the tribute paid her a fine lesson has been taught both white and colored, for it has given a practical evidence of the love and dependence existing between the two races and given our people an honest proof that no matter what the race or who the people that “The memory of the just is blessed.” 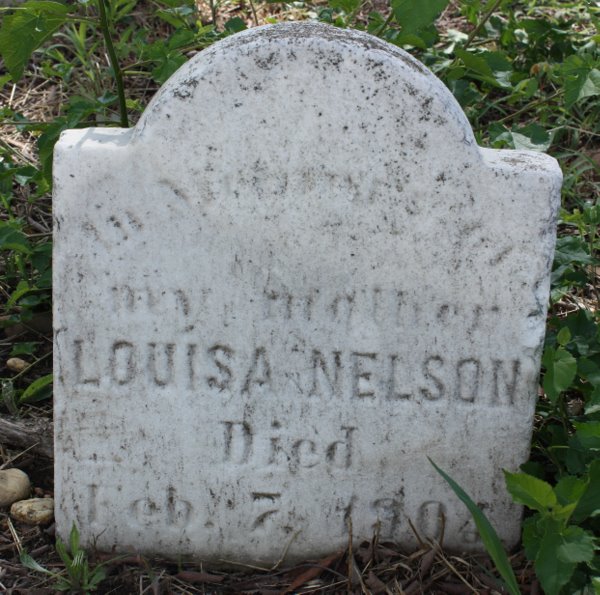