A Brief History of Libraries at VCU's Monroe Park Campus 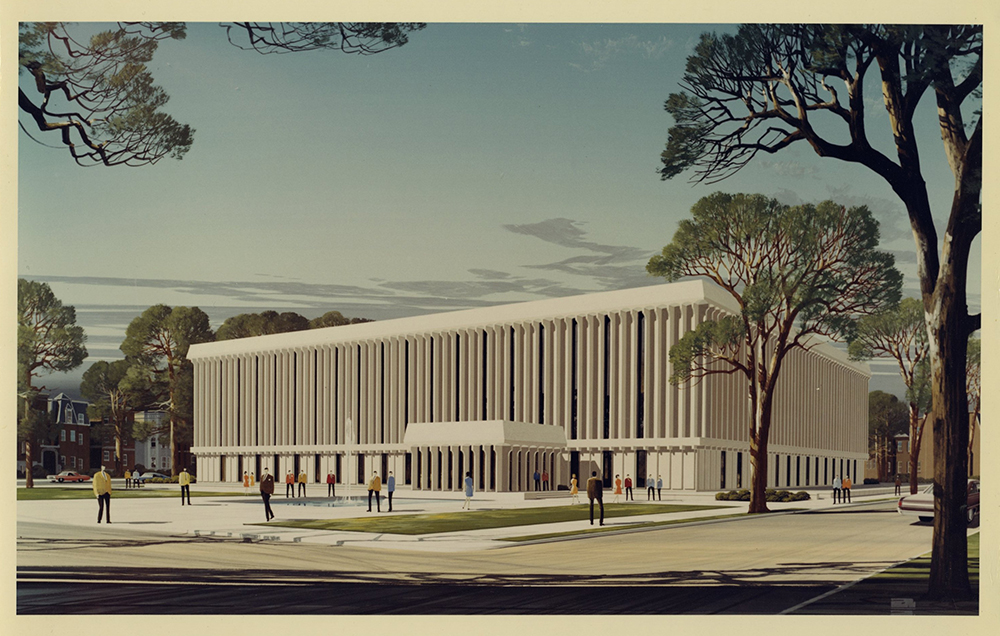 From a modest beginning of a few shelves of books in a parlor to the present new building with more than 2 million print volumes and 300,000 square feet of space, the university, in various names and forms, has always had a library or two.

The Health Sciences Library, previously known as Tompkins-McCaw Library for the Health Sciences, has operated in its same 12th Street location since 1938. Primarily serving the MCV Campus and one of the oldest medical schools in the South, founded in 1838, the library, in one form or location or another, has been a part of the medical campus since 1897.

On the Monroe Park Campus, an early library (circa 1925) was housed in Founder's Hall (827 West Franklin Street). In 1930, the school moved to Ginter House, and the library and its part-time librarian, moved with it.

That same year, Col. A.A. Anderson, a noted painter from New York, gave money to the school to convert the stable of the Ginter mansion into an art gallery. The Anderson Art Gallery, as it was known, served a dual role as library and gallery until the gallery closed sometime around 1940. Rosamond McCannless was the institution's first full-time librarian. In 1939 when the school name changed to Richmond Professional Institute, the library held 7,457 volumes.

Work on what would become the James Branch Cabell Library began in 1966 when the architectural firm of Lee, King and Poole was commissioned to design a new library. Russell Bailey was the consulting architect. Construction began in 1968, the year Richmond Professional Institute and the Medical College of Virginia merged to become Virginia Commonwealth University. In August 1970, the James Branch Cabell Library opened its doors to students and faculty as a two-story building. Construction continued until March 1975 when the final three floors of the library were completed.

During construction, the Associates of the James Branch Cabell Library were formed. Under the leadership of Margaret Freeman Cabell, this group of private philanthropists supported the library and helped build both its collections and its programming. Mrs. Cabell donated her husband's personal library and papers to VCU.

On June 10, 1976, six years after it had been in use, James Branch Cabell Library was formally dedicated in the presence of many individuals who had worked to see its creation. At the ceremony, VCU President Dr. T. Edward Temple said, "Without a library, there is indeed no university." Today, despite years of change for both universities and libraries, Temple's statement remains true.