Group portrait of attendees at the Interracial Conference of Church Women, Eagles Mere, Pa., September 21-22, 1926. Adèle Clark, seen on the far left in the third row from the bottom, attended as a representative of the NLWV. The Eagles Mere conference was noteworthy because it brought together white and black women leaders to study the possibilities of larger cooperation.

Clark and the VLWV moved beyond what the ESL had done in the area of race relations in Virginia. Although it remained a segregated organization, the VLWV openly worked with African American women on reform efforts. Members of the League helped to create more opportunities for African Americans in the areas of education, housing, and employment. They advocated for progresive legislation that benefited African Americans and others. They were among many organizations that opposed the revival of the Klu Klux Klan. In 1921, soon after the VLWV organized, they adopted a resolution sent to Gov. Westmoreland Davis condemning the Klan and its methods. 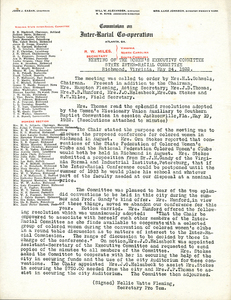 Minutes of the Woman's Executive Committee of the Virginia Inter-Racial Committee. Richmond, Va. May 24, 1922. The Richmond city auditorium that was mentioned for use by National Association of Colored Women’s Clubs for their annual convention is now VCU's Cary Street Gym. 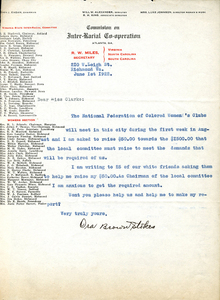 Letter from Ora Brown Stokes to Adèle Clark, June 1, 1922 regarding fund raising for the annual convention for the National Association of Colored Women’s Clubs that was to take place in Richmond that year. Stokes served for about a decade as president of the association's southeastern section.

In 1921, Clark and Nora Houston became founding members of the Virginia State Inter-Racial Committee, chaired by Mary-Cooke Branch Munford. This group was the Virginia affiliate of the national Commission on Interracial Cooperation based in Atlanta. Both men and women made up the organization. The Committee served as one of the few avenues of communication on social issues between leaders of the different races in Virginia.

In 1925, Clark was appointed chairman of the NLWV Special Committee on Inter-racial Problems. At the 1928 NLWV convention held in Chicago, Clark invited Ora Brown Stokes, an African American social worker and reformer from Richmond, to participate and speak at a committee hearing. Stokes was an active member of the Virginia State Inter-Racial Committee of Virginia. Her participation made her one of the first African American women to speak at a NLWV convention. At that same convention, Clark was responsible for having the name of the committee changed to the Special Committee on Inter-racial Relations. "It seems a small thing, but it has a good deal of significance to members of the Negro race," Clark said at the convention's general council meeting of officers.

Clark's efforts in regards to race continued after her years as president of the VLWV. In the 1950s, Clark served as chair of the Legislative Committee of the Richmond Diocesan Council of Catholic Women. In this role Clark advocated for a path to desegregation and other issues that arose in the 1950s and 1960s.