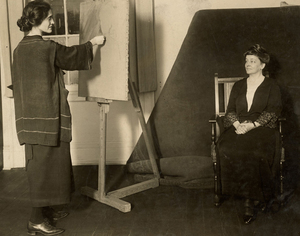 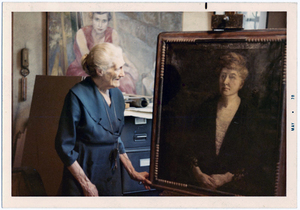 Clark continued to teach drawing and painting in the 1940s and 1950s. As late as 1956, when she was nearly seventy-five-years-old, she was teaching an art class once a week. Clark participated in hundreds of art exhibitions during her lifetime. Her paintings, mostly portraits and landscapes, were exhibited throughout Virginia as well as in several other states. One of her paintings, "The Cherry Tree" (1956) is in the permanent collection of the Virginia Museum of Fine Arts.

In a profile about Clark published in the June 12, 1983 issue of the Richmond Times-Dispatch, arts columnist Robert Merritt described her approach to art:

"... while her oeuvre as a painter and lithographer covered the full range of subjects, she always preferred to be thought of as a portraitist.  “I’d much rather draw a picture of people than a picture of things,” she once said. “People, if you like them, you want to draw them.”

“Art for her had to have social impact. It had to say something about people and about the way we live. And, perhaps most importantly of all, she felt that an artist had to be involved in life. ‘The artist who works only for self and keeps aloof from life is not likely to create anything really vital,’ she once said.”