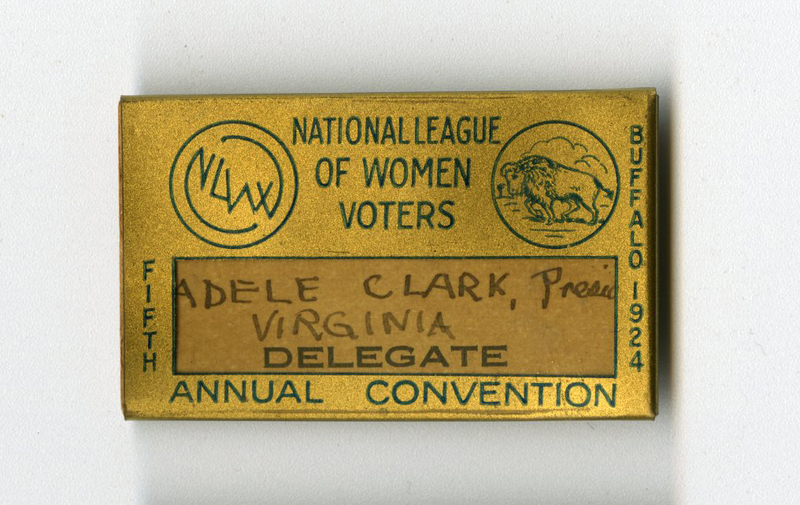 In 1920, the Equal Suffrage League of Virginia transitioned into the Virginia League of Women Voters (VLWV). Clark was elected its first chairman and became president in 1921. “Almost by default because so few people were willing to take it,” she later said.

Clark held the position of president of the VLWV for nineteen years, 1921 through 1925 and 1929 through 1944. The state League was affiliated with the National League of Women Voters (NLWV). Clark served at national level as well. In 1924, she was elected director of the NLWV's Third Region, which included Washington, D.C., Virginia, and six other southern states. She served as vice president of the NLWV from 1925 until the spring of 1928.

Her work in both organizations required Clark to travel throughout Virginia and the country on speaking tours and league business. She also attended three Democratic Party national conventions as a representative of the League during these years. Her work as an artist and art educator continued at the same time. She was so busy that once when someone phoned the Clark household asking for her, Clark’s mother informed the caller, “I don’t know where Adèle is. She’s out saving the world, but she’ll be back for supper." 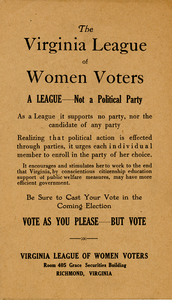 The Virginia League of Women Voters. A League Not a Political Party handbill, ca. 1920. 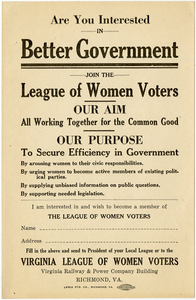 Are You Interested in Better Government? published by the Virginia League of Women Voters handbill, ca. 1920.

In addition to encouraging people to register and vote, the VLWV focused many of their activities on what they called good citizenship. Clark was instrumental in the establishment of citizenship courses for women through the University of Virginia's Extension Division and the VLWV continued this work throughout the state.

"The vote in women's hand is both [an] opportunity and a responsibility," said Clark in a speech she gave in 1926 at the seventh annual VLWV convention. With that duty, she said, "comes power."

Under Clark’s leadership, the Virginia League came to exert significant power promoting reform legislation. Soon after the League was formed, they persuaded the governor of Virginia to create a Children’s Code Commission to study issues affecting children in the state. As a result, eighteen laws that had been sponsored by the Commission - and actively supported by the VLWV - were passed in 1922 by the General Assembly. These laws included compulsory education, a limiting of child labor, and the establishment of a statewide court system for juveniles.

The League advocated for civil service reform and other good government efforts. In 1922, Clark was appointed to a two-year post as secretary to the Commission on the Simplification of State and Local Government. She was the only woman on the commission and authored chapters on public welfare. 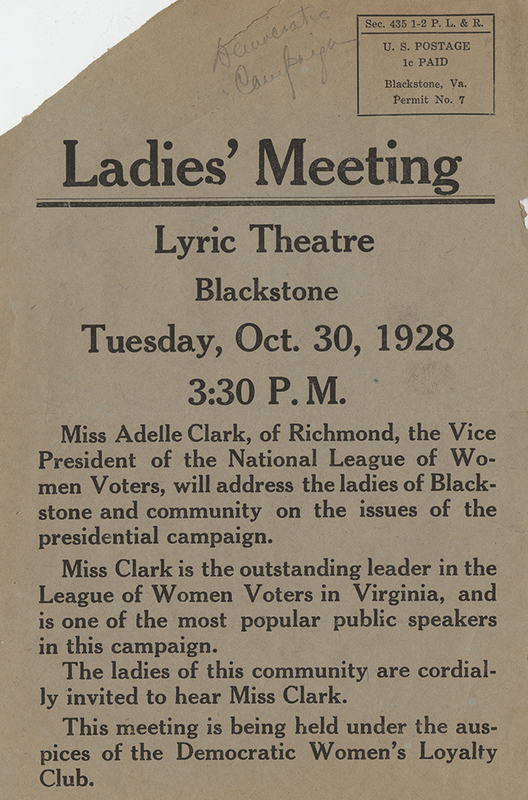 Flyer advertising a presentation by Adèle Clark in Blackstone, Va., 1928. The League's activism curtailed after the arrival of the Great Depression in 1929.

Soon after the Great Depression began in 1929, the activities of the VLWV were curtailed as its leaders and members faced new financial difficulties. During the 1930s and into the 1940s, membership and interest in the League waned. As reform legislation began to be passed at a national level with the coming of the New Deal, the VLWV became less of a force in the General Assembly.

As the 1940s began, Clark’s religious beliefs played an increasingly important role in defining her activism. Influenced by Nora Houston’s faith, Clark converted to Catholicism in November of 1942. Earlier that year Houston died at the age of fifty-nine. She had been Clark’s long-time friend, partner in the art world, and political ally. While Clark continued to be involved in League activities, she began to shift her political work to different priorities.