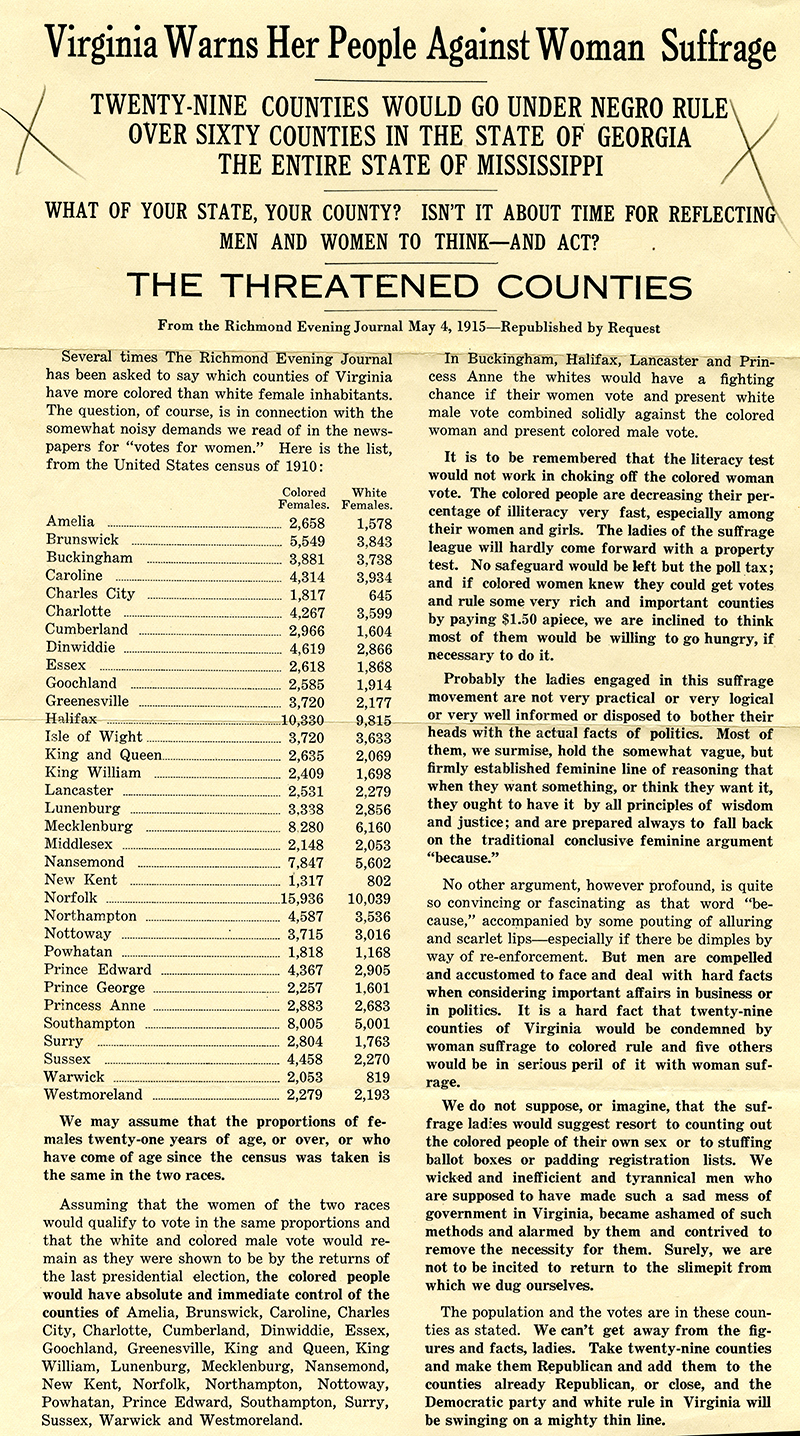 This broadside distributed by anti-suffrage forces in Virginia reproduced an editorial that appeared in the May 4, 1915 issue of the Richmond Evening Journal. Its message focused on the issue of race and "white rule."

Anti-suffragists in Virginia and in other southern states used race – specifically the threat of the increase in black voters - as their main argument against women’s suffrage. Their goal was to scare whites into thinking that supporting women’s suffrage would lead to the end of segregation and white supremacy. Groups like the Virginia Association Opposed to Woman Suffrage were active throughout the state and their arguments appealed to many citizens in Virginia including members of the General Assembly. 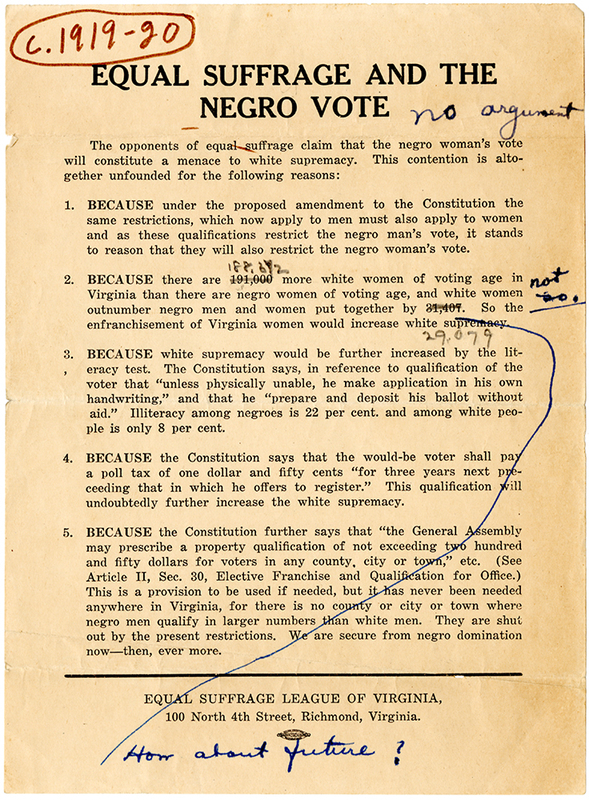 "Equal Suffrage and the Negro Vote" broadside produced by the Equal Suffrage League of Virginia, ca. 1919. The handwritten notes were made by Adèle Clark.

In segregated Virginia, the Equal Suffrage League of Virginia (ESL) was made up entirely of white members. There was no statewide suffrage organization for African American women although activists like Maggie L. Walker and Ora Brown Stokes advocated for women’s suffrage on behalf of African Americans.

When organizing for women’s suffrage in the first years of their campaign, the ESL avoided the issue of race. But by the time the 19th Amendment was scheduled to be voted on in the General Assembly in early 1920, they finally began to speak openly about it. They argued that women’s suffrage would maintain white supremacy. That it would not increase the black vote. In flyers and other communications, they argued that the restrictions that applied to the “negro man’s vote” would apply to African American women as well.

The bottom section of this ESL broadside promised that women's suffrage in Virginia would still keep "White Supremacy" in place. State restrictions on voting would still apply to the new women voters of both races which would ensure "No Negro Domination." 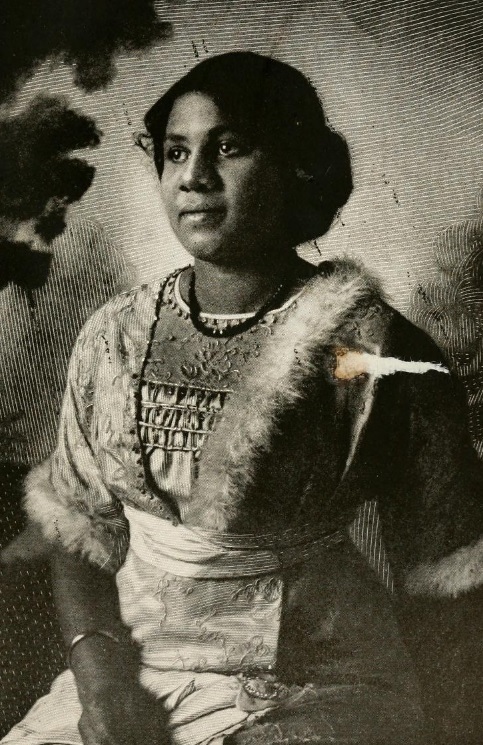 After the passage of the Nineteenth Amendment to the Constitution in late August of 1920, women had the right to vote. Throughout the month of September hundreds of women across the state registered to vote for the upcoming election in November.

The role of the Black voter continued to be an issue. Virginia newspapers published numerous articles noting the large number of women, black and white, who were registering. The fear of the “negro” voter dominated the headlines and editorials of Virginia newspapers. Clark recalled in an interview for the Duke University's Southern Oral History Program on February 28, 1964 that the "colored women had the most trouble with registering.”

There had been so much of that sort of thing: "If you get the vote, what about the Negro woman?" But we had some wonderful Negro leaders, and there was one in Richmond named Ora [Brown] Stokes, the wife of a colored clergyman. And she organized the colored women and taught them to register. But the City Hall here in Richmond registered the colored women separately from the white, down in the basement. And they worked out all sorts of things of having their hours shorter than the white women. We white women had a big fight with the electoral board, insisting on their giving the Negro women the same privilege of hours for election.

“They brought out everything that they could of Reconstruction, and they wrote outrageous editorials,” Clark recalled. She and Houston decided they needed to do something as “we were really afraid there’d be riots of sorts.”

[A]s we didn't dare ask them to join the Equal Suffrage League - this was before the League of Women Voters was organized - because we would have been accused of trying to get the Negro vote out, we took advantage of being artists, always considered a little erratic. So we had a group of the colored women come to our studio one night to talk over the whole situation with them, and to tell them that the men had been just as much afraid of our voting as they had been of their voting, but we wanted to assure them of our friendship.

On election day, Clark and several other members of the ESL drove through the city checking on "all the Negro polling places just to see if everything was going quietly. And everything went quite quietly; in spite of the fact that there had been threats of bloodshed and riot and everything else, there wasn't any rioting.”

Several years later, Clark invited Stokes to participate in a discussion led by the League of Women Voters' Inter-Racial Committee at its 1928 national convention in Chicago. Stokes was one of the first southern African American women who engaged in discourse with the national league.

Clark made another effort to reach out the African American community at this time. On November 20, 1920, she phoned Maggie L. Walker, president of the St. Luke Penny Savings Bank and perhaps the most respected leader in Richmond’s black community, about a “plan of Citizenship.” Clark’s phone call is mentioned in an entry in Walker’s diary, but the diary does not indicate further communications nor is there mention of this call in any known Clark records or interviews.

Although she was clearly interested in a dialogue with others, white and black, on the issues confronting African Americans, Clark and other progressives were cautious when it came to the issue of race.  “We never had the nerve to enroll the Negro women in the League of Women Voters,” she reflected in the Duke University interview in 1964. "I've always regretted it, but we just couldn't bring the middle-of-the-road thinkers to the point of bringing the Negro women in. A number of us, especially Lucy Mason, went to groups—Negro clubs and all—and talked to the Negro women about civic affairs. And we made as much contact with them as possible. But we couldn't do very much about it because we were afraid of being accused of being carpetbaggers, so that we [Laughter] had to stay out of it to a certain extent."

Clark would go on to become active in civil rights issues in Virginia. By the 1950s she advocated for the end of the poll tax and a path for desegregation in Virginia's public schools.