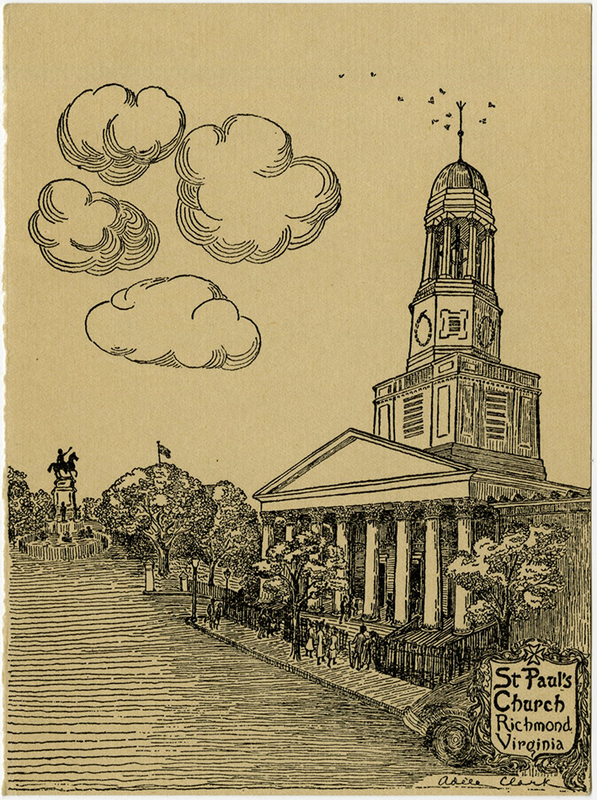 Adèle Clark converted to Catholicism in November of 1942 soon after her 60th birthday and became active in the church. As the head of the Legislative Committee of the Richmond Diocesan Council of Catholic Women (DCCW) from 1949 to 1959 she continued to advocate for legislation at a statewide level. After 1959 she served as a legislative advisor to the DCCW.

At the local level, Clark's community engagement in the 1950s included her role as secretary and spokesperson for a neighborhood organization, the Ginter Park Traffic Improvement Association. During this period the city proposed expanding traffic along Chamberlayne Avenue by widening the street. This was a major road in the Ginter Park neighborhood, one that Clark lived on for decades. While there was considerable public opposition to these changes, the city succeeded in its plans.

Art was still the major focus of Clark's life. She continued to be involved in teaching painting well into the 1950s and actively participated in Richmond's art scene through the 1960s.

Clark's role in Virginia as a long time artist and activist made her a well-known figure in Virginia. She received a considerable amount of newspaper coverage of her many activities. In a profile published in the September 16, 1956 issue of the Richmond Times-Dispatch, the newspaper noted that Clark "sees nothing unusual about a lifelong devotion to painting and politicking. To her a hot political debate, the cool confines of an art museum, or the dusty disorder of her Chamberlayne Avenue studio are different aspects of the same thing – a creative spirit.” 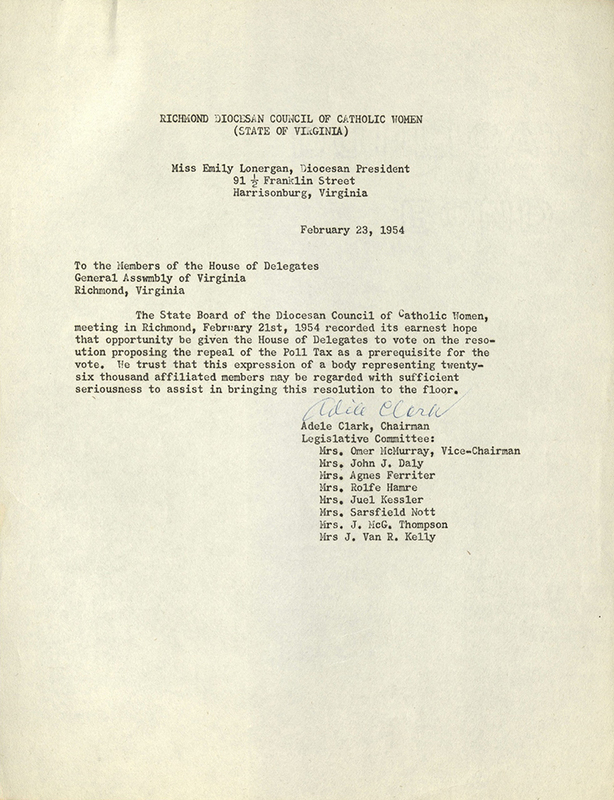 Letter to Members of the Virginia House of Delegates regarding the appeal of the poll tax from the Richmond Diocesan Council of Catholic Women, Feb. 23, 1954.

From 1945 to 1958 the Catholic Church in Virginia was led by Bishop Peter L. Ireton. During his tenure the church became a leader in supporting the emerging civil rights movement. In 1954, he announced the integration of the Catholic schools in the Diocese of Richmond, the first bishop in the south to do so. While there were still many Catholic Virginians who opposed these efforts, Ireton's leadership on civil rights gave Catholics like Clark and others the support they needed to act upon their progressive views.

As early as February of 1948 Clark came out publicly against Virginia's Jim Crow laws. At a public hearing at the Virginia General Assembly she was one of eight speakers who expressed their support for legislation sponsored by a Richmond delegate that would have ended segregation in public gatherings and in transportation. That legislation did not pass.

Beginning in 1952, the Richmond Diocesan Council of Catholic Women (DCCW) and other groups, including the Virginia League of Women Voters, campaigned for the repeal of the poll tax in Virginia. It was one of the Richmond DCCW's first legislative efforts in regards to civil rights. Over the years the Richmond DCCW regularly appealed to Virginia legislators to abolish the poll tax. Their efforts met with strong opposition from a majority of the state’s legislators. It was not until 1966 that the poll tax was ended when it was declared unconstitutional by the U. S. Supreme Court. 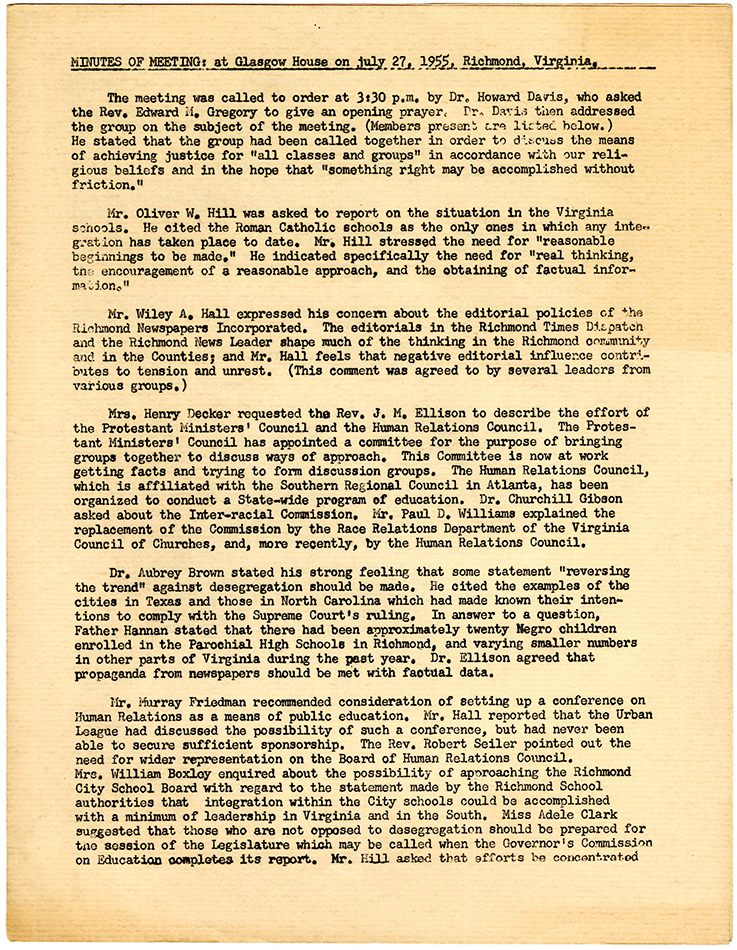 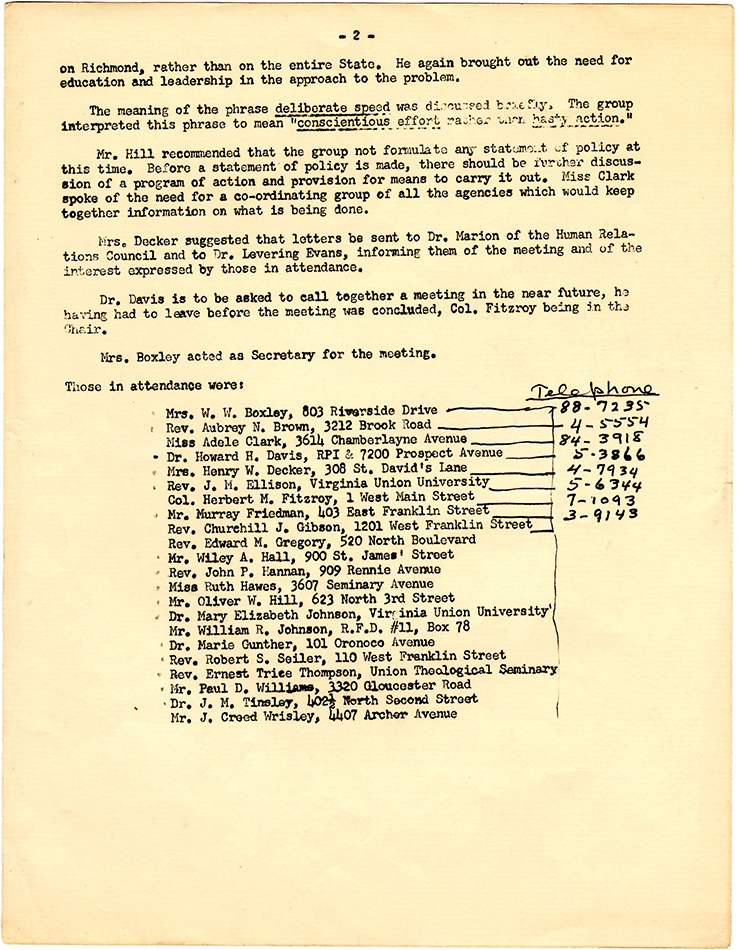 Minutes of the first meeting of the "Conference Group" which met July 27, 1955.

Among the many items in the papers of Adèle Clark held in Special Collections and Archives is one folder containing the minutes of several meetings of a little known bi-racial group of Richmonders that met throughout the latter half of 1955. Calling themselves "The Conference Group," the group was made up of about twenty Richmond citizens who wanted to explore ways to oppose the school segregation efforts emerging in the General Assembly. The Brown v. Board decisions had been announced the previous year and Virginia legislators were beginning to devise methods to avoid desegregating Virginia's public schools.

The Conference Group met monthly at the Glasgow House at One West Main Street, the former home of writer Ellen Glasgow (1873-1945), one of the founders of the Equal Suffrage League. The very existence of this bi-racial group made up of prominent progressives was remarkable in 1950s Richmond. 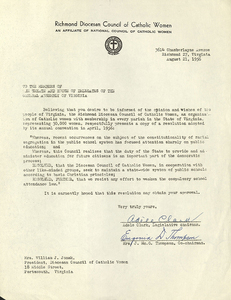 Letter to Members of the Senate and House of Delegates of the Virginia General Assembly from the Richmond Diocesan Council of Women in support of public schools and compulsory education, August 21, 1956. 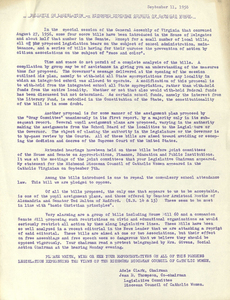 The Richmond Diocesan Council of Catholic Women (DCCW) were among the groups in Virginia that opposed the efforts by members of the General Assembly to fight desegregation in public schools. As legislative chairman of the Richmond DCCW, Clark spoke before many legislative hearings advocating that public schools remain open and for at least partial integration. It was in 1956 that Virginia adopted Massive Resistance as a policy to block desegregation in its public schools. At one hearing in September of 1956 Clark stated:

Although most Catholic children attend parochial schools, we as citizens are concerned with the welfare and education of our neighbors, as citizens, under the American system of government. And under the system the taxes of all citizens are applied to the support of the public schools. - Richmond Times-Dispatch, September 7, 1956.

On December 6, 1967, Clark received a brotherhood citation from the Richmond chapter of the National Conference of Christians and Jews (later the National Conference for Community and Justice). She was the first women in Virginia to receive that honor. When accepting the award she reflected on what had been accomplished since women won the right to vote:

Women in Virginia organized 58 years ago to obtain the vote. We sought no only rights but the accomplishment of a social program. … In the 47 years since our enfranchisement, much of our social program has been achieved. Children 8 years of age no longer work in mills, mines and factories. Children no longer go unschooled. Juvenile court systems exist and public welfare and economic security are concerns of the government.

It is true that the great goal of peace in the world is still to seek. Let us then press forward praying that with faith in God, hope in his guidance and increasing love of neighbor we may yet win the way to international cooperation. - Adèle Clark, The Catholic Virginian, December 15, 1967.