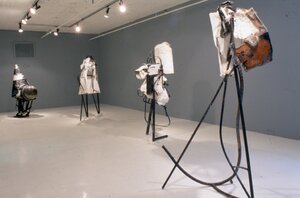 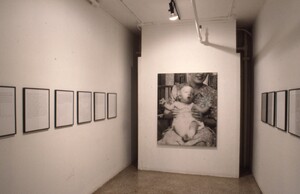 For nearly two decades the Anderson Gallery was able to provide a place of cutting edge artistic experimentation with minimal interference from the outside world. Its association with VCU, the small stature of the building itself, and the limited budget allowed the Gallery to avoid greater notoriety and the accompanying dangers of bad press. This did not last. In 1990 the Anderson Gallery was granted $15,000 from the NEA to exhibit “Nightmare Works,” a photographic selection of Hungarian artist Tibor Hajas’ work. The show featured some scenes of body manipulation, the most referenced of which was a photograph of a female model and the artist with their limbs bound and suspended in the air. This content caused a stir among the Richmond community, leading to an exchange of words in the editorial section of the Richmond Times-Dispatch between the paper and the Anderson Gallery director Steven High. Nothing more serious occurred, allowing the exhibition to finish its run without issue. But the Culture War surging through the American art scene was not finished with the Anderson Gallery.

Two years later in 1992, the gallery submitted a grant proposal for $10,000 to support a show titled “Anonymity and Identity” to the NEA. The NEA advisory committee unanimously supported the proposal, but the acting chairwoman of the endowment, Anne-Imelda Radice, rejected it, stating that the proposed show was sexualy explicit. At the same time, she also rejected another supported proposal for the List Visual Arts Center at MIT’s show “Corporal Politics” on identical grounds. Her actions caused a national uproar. Artists, curators, writers, musicians, and even a few politicians weighed in on the decision. The rejected shows did get displayed thanks to the generosity of protesters such as Jon Robin Baitz, who gave $7,500 each to the List Visual Arts Center and the Anderson Gallery about 2 months later, but Radice never reversed her decision. Whether her actions were “necessary in view of the temper of the times,” or an overreach of power by “a decency czar,” the scandal dragged the Anderson Gallery into one of the most charged debates about the state of art in the 20th century.

Age was also beginning to catch up with the A.A. Anderson building in the 1990s. Climate controls had always been a challenge in the space. Skylights allowed excessive light into the galleries if not covered, but little could be done about the poor insulation around them. False walls blocking exterior windows trapped heat and let in moisture, leading to crumbling stairs and drafty halls. In 1999 the consequences of these condition challenges became apparent. The Artist Foon Sham was picking up two sculptures after an exhibition when he noticed that the wooden joints on the works had cracked and nearly separated in places. Over the six weeks that the sculptures had been displayed, the climate of the gallery had fluctuated, jumping as far as from 20% to 50% humidity in two days. While there were other factors such as the adhesives used, and the wood types present in the sculptures to consider, an investigation concluded that the conditions of the gallery likely accelerated the sculptures’ deterioration.