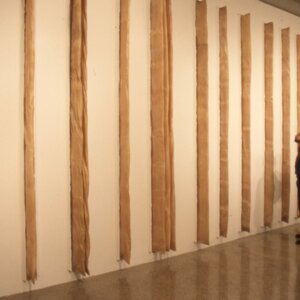 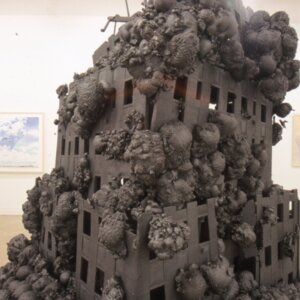 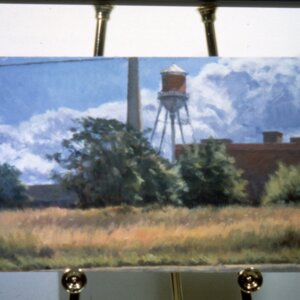 As Edwin Slipek of Style Weekly put it, “The Anderson consistently delivered two things: the new and the unexpected.” The early 2000s were a time of exploration for the Gallery, where challenges to the definition of art and to the role of the gallery space itself abounded. In 2006 a group of Art History graduate students curated a show titled “From the Seat of Authority,” which questioned the role wall labels, exhibition design, and context play in how we interpret works of art.

Other exhibitions like “Heide Fasnacht: Strange Attractors (2004),” and “Amy Hauft: Counter Re-formation (2009),” brought art off the walls and into the viewer’s sphere, forcing a physical reckoning with the pieces as they hung from the ceilings and invaded walkways.

These fascinating installations were followed by the establishment of “Sponge HQ” around 2010: a permanent project site that “attached”itself like a sponge to the gallery. Sponge HQ consisted of a 90 gallon freshwater aquarium, a felting and dying studio, a library, and active beehives. Through 2014, the space was involved in a number of innovative initiatives. From 2010 - 2011 it hosted Colablablab. This experimental collaboration took two groups of students, one in a biology course, and one in an art course, and put them in a class together to interpret their learning through art, forming a sort of class within a class. In 2012, Sponge HQ partnered with the exhibition “MoMA Studio: Common Senses” to form an event titled “Prototype for Preserving the Phylum Porifera,” where participants created sea sponge inspired pieces out of felt, foam, beeswax, and bronze. The felting continued in 2013 and 2014 as more sponges were created in partnership with the 9th Mercosul Biennial in Brazil, and for the Proteus Gowanus gallery’s “Thirst” exhibition in Brooklyn, New York.

Sponge HQ wasn’t the only addition to the Anderson in the 2010s. Around 2011, the Cool Spot Lounge was installed on the gallery’s first floor. The Lounge hosted periodical “Happy Hour” events on Wednesday evenings with special programs, exhibition talks, and a cash bar so that visitors could enjoy drinks while perusing the courtyard and ground floor.

Yet, despite all of the innovations and world class shows that the Anderson Galley was constantly installing throughout the 2000s and into the 2010s, a number of factors were increasing strain on the galley’s daily operations. The VCU art programs were growing rapidly, and student shows as a consequence were requiring more and more space each year. 2000 was the first year that the MFA Thesis Exhibitions were split into two groups to try to manage this demand, but it was clearer every year that the Anderson building alone might not be enough.

The building itself had not improved functionally either. Temperature fluctuations within the gallery spaces continued to run rampant, celings leaked, the staircases were narrow, and the humidity ranges were still jumping wildly with the conditions outside. Plans to add an elevator in the late 1990s and the 2000s fell through, leaving accessibility issues for both students and visitors.

It was finally decided after much deliberation that the Anderson Gallery’s programs should continue, but that the building itself was no longer the best fit for the needs of the VCU community. The Anderson Gallery was slated to close in 2015. The Depot and the Institute for Contemporary Art (ICA) at VCU that was under construction were identified as the new locations for the types of programs that the Anderson Gallery had been responsible for, such as exhibitions, student shows, and art programing.