Early History of the Anderson Gallery 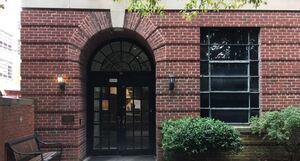 While best known for being the home of the Anderson Gallery, The A.A. Anderson Building at 907 1/2 W Franklin Street in Richmond Virginia has served many purposes over the years. From simple beginnings as a stable for the nearby Ginter House in 1890, to the main branch of the Richmond Public Library in 1897, the building was a fixture in the Richmond landscape long before it was acquired in 1929 by RPI with the help of Colonel Abraham Archibald (A. A.) Anderson.

Colonel Anderson wanted Richmond to be known as a center for the arts, hoping that “the cities of the country will soon look to her with pride.” For a few short years, 1929 - 1936, the Anderson building was Richmond’s only gallery exhibiting modern artists. Exhibitions of works by local artists such as Theresa Pollak were accompanied by the art of internationally renowned creators like Pablo Picasso and Wassily Kandinsky.

When the Virginia Museum of Fine Arts opened in 1936, the building was transformed back into a library for RPI. In 1939, A federally funded third story addition was added and the building acquired a full time librarian by the name of Rosamund McCanless. The upstairs galleries were transformed into reading rooms. The only artworks gracing the walls were prints from Dr. Hibbs collection positioned above the stacks. Things would remain this way until February 1969 when the Anderson building was transferred to the School of the Arts.