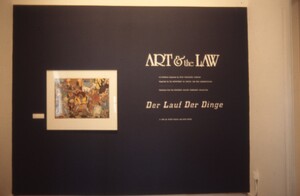 The 1980s were a time of experimentation, creativity, and frenzy for the Anderson Gallery. This decade would see a booming art culture where Postmodernism and Neo-Expressionism were on the rise. Art expanded increasingly into new media such as film and digital formats, while acceptance for street art such as Graffiti gained momentum. Politics became front and center in the work of many artists, critiquing everything from consumerism to military conflicts.

Still a relatively new artspace in the process of creating a reputation for itself, the Anderson Gallery had the flexibility to explore art that pushed boundaries in more ways than one. Because of the limited space and budget facing the gallery, many of the shows were geared towards installations as a gesamtkunstwerk, or a “total work of art.” Artists would tell a story with their pieces as a whole throughout the space, rather than a series of smaller stories prompted by individual works. It was a time of site specific installations as well. Exhibitions changed almost monthly across the six gallery spaces under the watchful eye of director Marilyn Zeitlin.

Funding for these frequent exhibitions came largely from community support. The small museum store, a membership program, and at least one gala helped the Anderson Gallery rise above its budget constraints at times. The largest triumph for the Gallery’s financial situation in the 1980s was learning to write grants. Before the culture wars of the 1990s, The National Endowment for the Arts supported several exhibitions, and a grant from the Institute of Museum Studies got the Anderson Gallery recognized nationally among small museums.