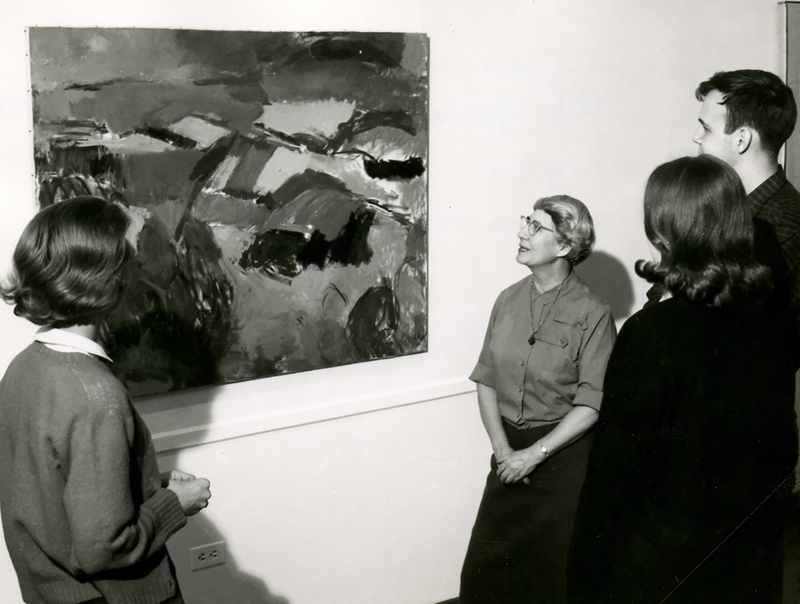 Pollak discussing her painting, Afton Mountains, with a group of art students at RPI, ca. 1962. 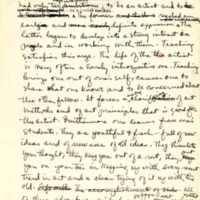 Pollak's comments about teaching, written in 1940. 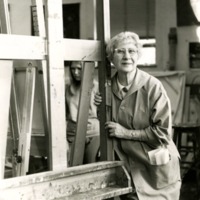 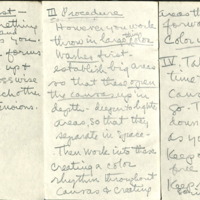 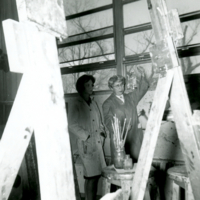 At the end of her lesson plans for an evening class in the 1950s (included at right) Pollak jotted a reminder to tell her students, “Go ahead as you want to work—any way it comes.” [M 5, Box 1b, Miscellaneous Writings, PM Class.] This simple note says a great deal about Pollak's approach to teaching art.

As much as she appreciated the rich diversity of life itself, Pollak equally championed diversity in art. Hence, the central policy in her classroom was always one of artistic freedom and exploration. She did not want her students to feel restricted by outdated principles, oppressive labels, or contemporary fads, nor did she expect them to conform to her own styles and techniques. Instead, Pollak’s teaching method stressed “freedom through discipline” [M 5 Box 1, Biographical Data, Radio Address about Theresa Pollak], meaning she taught each of her students the firm, academic principles of line, color, and composition, while also urging them to deviate from this foundation once they had mastered it—to branch out and take their own art in any direction they pleased.

Pollak’s teaching philosophy was largely shaped by Allen Tucker, who had taught Pollak at the Art Students League of New York in the 1920s. Tucker had been one of Pollak’s most supportive instructors—even critiquing her artwork by mail when illness kept Pollak from New York in 1924—and he eventually became her lifelong friend as well. (Much of their correspondence can be found in the Theresa Pollak Papers.) In Pollak’s words,

“Tucker…brought to the class the real meaning of art, as perhaps no other teacher could. A genuine human being…he looked at each of us as though we mattered and existed for him as individuals. In his great respect for the freedom and integrity of the artist, he never touched our work, but rather took his cue for discussion from what he saw on our canvases…. Perhaps more than any other one person in my life, Allen Tucker has been the greatest influence, standing for me as the highest example of a fine teacher, an artist of integrity, and most of all, a great man.” [M 5, Box 1, Biographical Data, Recollections of the Art Students League.]

Taking a cue from Tucker, Pollak respected her own students as individuals and as artists of integrity, recognizing that they, too, have knowledge to share. For example, in a handwritten commentary on teaching (above), Pollak asserts, “One learns from one’s students. They are youthful [and] fresh—full of new ideas and of new uses of old ideas. They stimulate your thought, they keep you out of a rut, they put you on your toes in keeping up with every recent trend in art and a clear tying of it up with the old.” [M 5, Box 1b, Miscellaneous Writings, Comments about Teaching.] Furthermore, Pollak made it her duty not merely to teach (and learn from) her students, but to also inspire them. She urged them to always remain open to new opportunities, encounters, and even mistakes; to be receptive to colors, patterns, and forms in nature that might awaken new directions in their art; and, most importantly, to work in whatever way excited them the most—for one’s own excitement is crucial in keeping one’s art alive.

That Pollak placed few restrictions on her students’ artwork does not mean that she had few demands, however. A quotation from Dr. Burgart’s speech at the Pollak Building dedication ceremony summarizes the instructor’s high expectations:

“The comments I most often hear are, ‘[Miss Pollak] made demands for quality on me that I didn’t realize I was capable of meeting’, She was a hard and demanding taskmaster who settled for nothing less than my greatest potential’. Her expectations of others are always high, her demands for quality is [sic] unceasing, she works long, hard and unselfishly for what she believes in and expects no less from others. In a period of human development when these virtues are less than evident, but never more appropriate, I can safely say that we all appreciate the standards she entrusted to us.” [M 5, Box 2, Dedication of Pollak Building.]