In this letter, dated 11 June 1928, Dr. Henry H. Hibbs formally notifies Theresa Pollak of her appointment as instructor of art at the Richmond Division of the College of William and Mary. 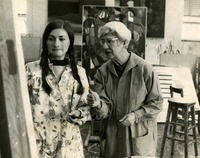 Theresa Pollak (front, left) with her classmates at the Tiffany Foundation in Oyster Bay, Long Island, 1932. 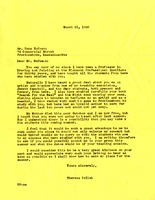 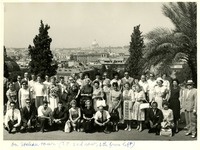 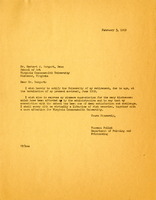 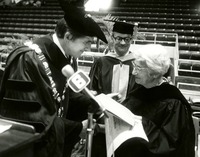 Pollak received an Honorary Doctorate of Fine Arts from her alma mater, the University of Richmond, on 13 May 1973. 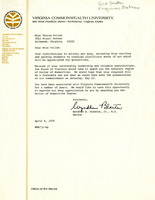 This letter from Wyndham B. Blanton, Jr. notified Pollak of Virginia Commonwealth University's Board of Visitors' decision to award her with the Honorary Doctorate of Humanities in 1978.

Theresa Pollak receiving the YWCA's "one of ten most prominent Women of the Year in Richmond" award in 1986.

An undated and untitled text handwritten by Pollak, expressing her feelings about life and acceptance.

Mayor's Tim Kaine's recognition of Theresa Pollak's 100th birthday and her innumerable contributions to the city of Richmond.

Pollak returned to Richmond from the Art Students League in the spring of 1926. Two years later, she and Edmund Archer, a childhood friend and fellow RAC student, organized a joint art exhibition. At the time, Pollak was unsure how she would make a living in Virginia. But in a fortuitous chain of events, the 1928 exhibition proved to be a major impetus in her career. Upon viewing the show, local artists William Young and Charles Smith recommended Pollak to Dr. Henry H. Hibbs, who sought an instructor to launch an art school at the Richmond Division of the College of William and Mary, where he served as Dean. On Young and Smith’s recommendation, Dr. Hibbs called Pollak for an interview. After their first meeting, he hired her to teach a Drawing and Painting class the following semester.

Despite Pollak’s lack of teaching experience, she thrived in her new position. Not only did she successfully create an art school for Dr. Hibbs, but she also taught the first art classes ever offered at Westhampton College between 1930 and 1935. Subsequently, she was promoted to fulltime Professor of Art at the Richmond Division of the College of William and Mary, where she taught exclusively for over thirty more years—enduring many changes as the college evolved into Richmond Professional Institute in 1939 and, finally, Virginia Commonwealth University in 1968. Miss Pollak officially retired in 1969, but she never ceased involvement with the School of the Arts. As Professor Emerita, she maintained close contact with her colleagues and former students for three more decades.

Although Pollak became a lifelong teacher, her own thirst for learning endured. She continually augmented her artistic proficiency by returning to the Art Students League of New York throughout the 1930s and 40s, and she pursued further professional training at the Tiffany Foundation in Long Island (1932), the Fogg Museum at Harvard University (1933), the Steiger Paint Group at Martha’s Vineyard (1937), and the Hans Hofmann School of Painting (1958). In 1962, Pollak refreshed her skills once again by traveling to Europe, where she studied the nuances of color and tone in French Impressionist paintings first-hand. Naturally, her participation in numerous competitions and exhibitions across the United States also sharpened her artistic prowess over the years.

Notably, Pollak’s steadfast enthusiasm for art benefited not only herself and her students, but also the entire community of artists in Virginia. She served, for instance, as Chairperson for the Artists Advisory Committee and as President for the Virginia Art Alliance, both of which were essential to the early development and expansion of the Virginia Museum of Fine Arts (VMFA). She was also involved with the Virginia Educational Association, the Richmond Artists’ Association, and the Federal Arts Committee, all of which helped secure funding for the arts in Virginia and offered support and recognition to local artists. Furthermore, Pollak frequently sent essays to Richmond newspapers, such as Times Dispatch and News Leader, to express her advocacy for artistic freedom and to call for more diverse and inclusive art collections.

As a distinguished artist and devoted activist, Pollak touched countless lives and inspired multiple generations. Fortunately, in an age when many women were denied the public recognition they deserved, Pollak’s excellence was not overlooked by her community. She received recognition in many forms throughout her lifetime, including more than ten awards for painting, two honorary doctorate degrees (the Doctorate of Fine Arts from University of Richmond in 1973 and the Doctorate of Humanities from Virginia Commonwealth University in 1978) and one of Richmond YWCA’s “Most Prominent Women of the Year” awards in 1986. Moreover, in honor of her innumerable contributions to the city of Richmond, Mayor Timothy Kaine and the Richmond City Council designated Pollak’s 100th birthday—13 August 1999—as “Theresa Pollak Day.”

To be so unremittingly dedicated to one’s career requires tremendous energy and perseverance. Pollak never faltered in her commitment to the arts, nor did the zest with which she worked. Above, an undated document handwritten by Pollak suggests that the source of her stamina was her love of life itself. She writes, “Always one must be happy at whatever comes because whatever comes is life, and therefore wonderful. Whatever comes is an adventure and a privilege—the privilege of feeling, sensing, experiencing and as long as one has this all should be welcome.” [M 5, Box 1b, Miscellaneous Writings.] Pollak clearly lived by these words, constantly searching for new opportunities and welcoming every challenge with remarkable tenacity.

To view a more comprehensive list of her many accomplishments, click through to her curriculum vitae on the next page.