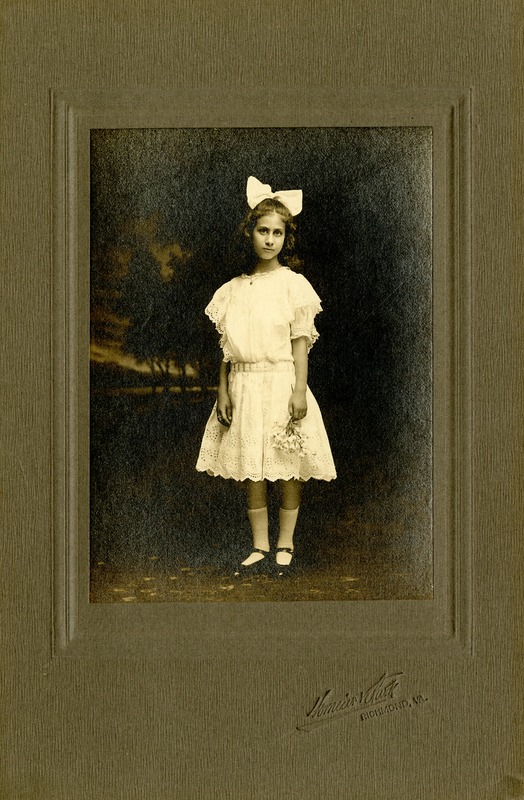 Theresa in confirmation dress with her brother, Philip, 31 May 1914.

An undated photograph of Theresa Pollak and her mother, Ester.

Armin Pollak, father of Theresa and Philip Pollak, died when Theresa was about 11 months old. 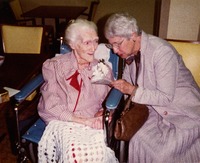 Decades after Pollak (right) left the Richmond Art Club, Adele Clark (left) continued to be an important figure in her life. Here, the two women are seen celebrating Clark's 100th birthday at Westminster-Canterbury in 1982. 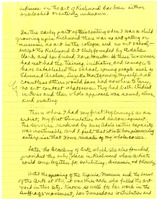 A draft of Pollak's nomination of Adele Clark for the First Governor's Award for the Arts in 1973. These awards were intended for individuals and organizations in Virginia that had made significant contributions to the arts.

A photograph of Theresa Pollak upon graduating from John Marshall High School in 1917.

Pollak as a student at Westhampton College, University of Richmond, ca. 1918-1921.

Although Pollak became one of Virginia’s most celebrated artists, she grew up in a period when Richmond’s art scene—now booming with activity—was in its infancy. Until roughly the late 1920s, the community’s only artistic outlet was the Richmond Art Club (RAC), founded by two of Virginia’s best-known artists and suffragists, Adele Clark and Nora Houston. Pollak attended the RAC twice a week after school between 1912 and 1917, and these sessions became increasingly meaningful to her over the years. In fact, in her nomination of Clark for the 1973 First Governor’s Award for the Arts (see thumbnail at right), Pollak recalls,

“When I was a child growing up in Richmond there was no art gallery or museum, no art in the colleges, and no art school—except the Richmond Art Club…. If [Clark and Houston] had not had the training, initiative, and courage to have established this school, young people…would have had nowhere to turn, no art contact whatsoever…. This is where I had my first beginnings as an artist, my first stimulation and encouragement.” [M 5, Box 1, Federated Arts Council of Richmond.]

Inspired by Clark and Houston, Pollak had hoped to study art more seriously in New York City directly after high school. However, due to a generous scholarship offer, and to her mother’s insistence that she remain in Virginia, Theresa studied at Westhampton College of the University of Richmond instead. Temporarily placing her art education on hold, she graduated with a B.S. in chemistry in 1921.