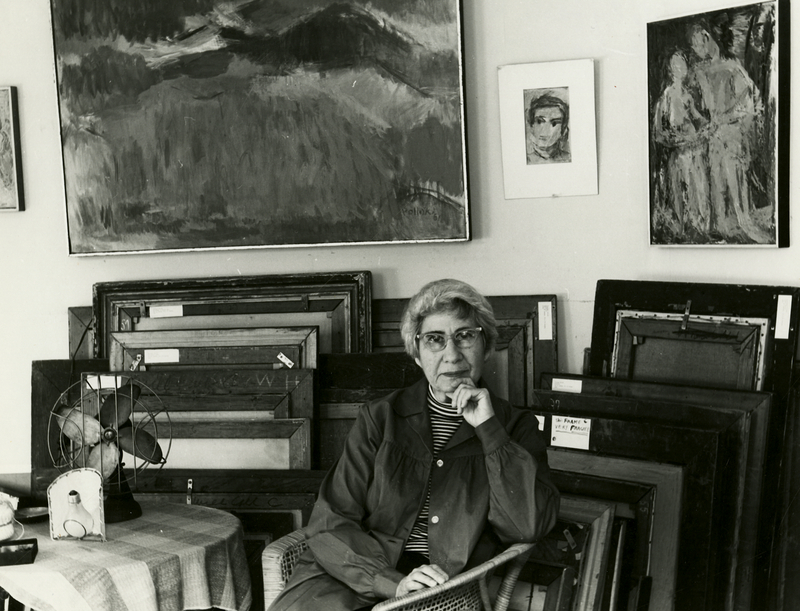 Undated photograph by Jack Wright of Theresa Pollak in her studio at 1407 Grove Avenue, Richmond.

Pollak with her painting, Little Miss Goldsby, at her studio on W Franklin St., ca. 1940. 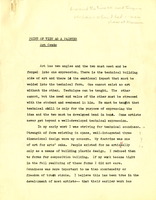 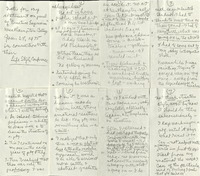 Theresa Pollak's notes for a talk on "Creative Expressions," in connection with Westhampton College's Lifestyle Conference on 25 January 1975. 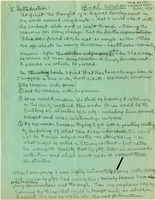 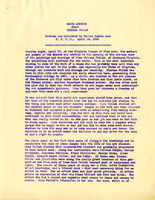 A radio address about Theresa Pollak, written and delivered by Marion Junkin, 14 April 1940.

Pollak in front of her painting, Painter's Porch, at the opening night of the Virginia Museum of Fine Art's Virginia Artists Biennial Exhibition of 1971. 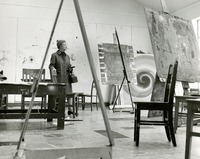 A photograph of Pollak in her painting class studio on the third floor of the gymnasium building at RPI (later VCU), March 1956. 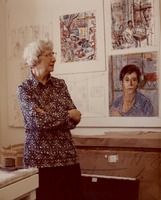 An active painter for over six decades, Pollak kept her work fresh by experimenting with various painting styles, yet she skillfully allowed each phase of her art to build upon its predecessor. As an educator, she was apt to explain the many transitions in her work during lectures and public talks. The drafts for these speeches are among the highlights of the Theresa Pollak Papers, as they provide valuable research material on one of Virginia’s most pivotal artists.

The current page summarizes the evolution of Pollak’s approach to painting over the course of her career. Documents of note here are Pollak’s “Point of View as a Painter: Art Credo,” notes for her 1975 lecture on “Creative Expressions,” a draft of her 1974 talk at the VCU Woman’s Club, and a transcript of a radio address about Pollak delivered by her colleague, Marion Junkin, in 1940.

During the 1920s, Pollak prioritized academic proficiency and visual accuracy over personal “freedom of expression.” As she later explained, “In my early work, I was striving for technical soundness. Strength of form existing in space, well-integrated three dimensional design were my concern.” [M 5, Box 1b, Writings by Pollak, Art Credo.] However, beginning in the late 1930s, and increasingly throughout the 1940s, she allowed greater freedom and abstraction to flow through her paintings. She described this transformation in her talk for the VCU Woman’s Club in 1974:

“Gradually in later years I realized that, while I had achieved a sort of technical soundness, my paintings did not say anything, that there was in them nothing of what I really was as a person and I suppose I might say that the struggle began and has continued to this day to make [paintings] that, through their form, state something of what I feel of the depth and poetry of life…. I keep working with a painting until it begins to have something of the feeling I want for it—but it would be difficult for me to put into words what I am striving for. As a teacher of mine used to say—“We paint because we have something to say that can’t be put into words.” [M 5, Box 11, 1974 Notes for Lectures, VCU Woman’s Club.]

In order to create more subjective art, Pollak began to embrace the experimental techniques of abstract expressionism. She particularly admired the work of Hans Hofmann, one of the most influential artists, theorists, and teachers in postwar America. In fact, after longing to study with him for many years (yet previously hindered by familial obligations), Pollak finally attended Hofmann’s School of Painting in Provincetown, Massachusetts in 1958. Her most abstract paintings date to this period, demonstrating her eagerness to put Hofmann’s teachings into practice. Replacing academic precision with creative expression, she liberated color and line from their representational duties and gave them a life of their own.

However, Pollak did not stray from figurative painting altogether, for the natural world was her greatest source of creativity. In her own words, “I have always been dependent on a visual experience to get me started—something that I have seen that has excited me visually, rather than ideologically.” [M 5, Box 11, 1974 Notes for Lectures, VCU Woman’s Club.] Thus, after briefly experimenting with Hofmannesque abstract-expressionism, Pollak resolved to combine representational and non-representational details in her paintings, negotiating between objects found in the external world and her own personal impressions of them.

In his 1940 radio address, Junkin declared that because Pollak did not merely imitate the visual world, but reached below the surface of objects and people and used color and line to record their perceived essences, her paintings were decidedly “modern.” Junkin continues,

“[Pollak’s] work, which is of course a record of what she sees and feels, is modern art because it contains more than just the visual impression of things seen, but this is ordered and organized and brought to a conclusion…. Colors are not accidentally copied but are ordered and harmonized like sounds in music. This is why…her work is modern, because into it has gone her mind and soul in a will to create rather than copy nature.” [M 5 Box 1, Biographical Data, Radio Address about Theresa Pollak.]

Indeed, Pollak has frequently been credited with introducing modern art to Richmond. This was a sizable accomplishment considering the city’s reluctance to accept new artistic trends at the time, yet the New York-trained artist was determined to spark a greater openness to progressive, non-traditional techniques in her southern home state.

Continue to the next page to learn more about Pollak's perspective on modern art.