The Formation of VCUarts

Pollak's book, An Art School: Some Reminiscences, published by VCU School of the Arts in 1969. 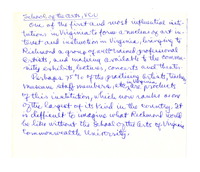 A draft of Pollak's nomination of VCU School of the Arts for the First Governor's Award for the Arts in 1973. These awards were intended for individuals and organizations in Virginia that had made significant contributions to the arts. 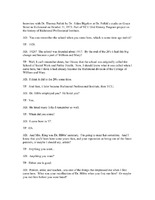 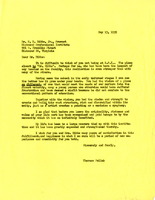 Two local artists, Antoinette Hollister and Charles Smith, had already taught art classes (in sculpture and commercial art, respectively) at the Richmond Division of the College of William and Mary before Pollak’s arrival. But when Dean Hibbs hired Pollak in the summer of 1928, he sought an instructor of painting and drawing who could help establish a comprehensive art school. He gave Pollak a contract to teach a daytime class that fall semester, pending the enrollment of at least five students in the class. However, finding the students was Pollak’s responsibility, and it was no easy task. She later recalled:

“Forthwith I spent hours at the telephone, calling up everyone who to my knowledge had ever evinced an interest in art. I can remember to this day my feeling of pride and achievement when the first student actually registered in July for the coming fall semester. When the class convened in September there were, to my amazement, about twenty students.” [An Art School: Some Reminiscences.]

Subsequently, with the surprisingly high enrollment of Pollak’s daytime class, she was permitted to add a night class as well as a children’s class on Saturday mornings—both of which also reached full enrollment. These three classes, which met in the third-floor studio of the Shafer Street Playhouse, formed the core of what is now, almost ninety years later, VCU’s School of the Arts.

The most complete report on the School’s development comes from the founder herself. Pollak’s book, An Art School: Some Reminiscences, published in 1969 by Virginia Commonwealth University, is a detailed account of the early beginnings and development of VCUarts. Part I, written in 1948, shares her recollections from her first twenty years at the School of the Arts, when it was still Richmond Professional Institute. Part II, entitled "Further Reminiscences," addresses Pollak's last twenty years at the School of the Arts. While expressing personal thoughts and narrating memorable experiences, Pollak also reflects upon the roles of key individuals, the changing dynamic of the student body, and the consequent changes in perceptions about art and its production that transformed the School of the Arts into the renowned institution it is today. Click on the cover of An Art School: Some Reminiscences (above) to read a scanned copy of the book in its entirety. Alternatively, a searchable text version of the book is available here.

In addition to her book, Pollak offered a similar narrative of the art school's development, with more anecdotal details, in an Oral History interview with Dr. Alden Bigelow in 1975. (Click the thumbnail above for a transcript of this interview.) Significantly, these documents describe not just Pollak's involvement with VCUarts, but also the contributions of many other important figures—especially Dr. Hibbs—to the school's evolution. In fact, in both the interview and her book, Pollak singles out Dr. Hibbs as a major contributor to the overall spirit of VCUarts:

"I do think that this...creative urge, this urge to create, to express something in the graphic, or in, what do you call it...visual form, is so strong in certain people that it sort of carries them and with all the other difficulties with life today, I think that this thing, this thread that sort of runs through and ran through students from the beginning and still runs through them, and these students...I don't know, it was just something very wonderful.... But what I'm really trying to say is that it isn't just art, that I think VCU has a certain aliveness about it and that the students do have a certain independence of interest and not just doing things the teacher tells them. This thing is due to Dr. Hibbs, and I think that Dr. Hibbs had this kind of spirit." [Oral History Interview.]

One should note, therefore, that although Pollak accepted credit for shaping the overall curriculum and development of VCUarts, she humbly attributed the school's creative, lively, and ambitious spirit entirely to Dr. Hibbs, without whose initiative and vision the School of the Arts would not exist.