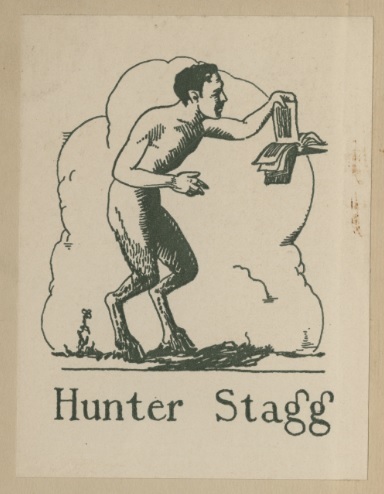 Bookplate of Hunter Stagg. The Pan-like figure holds a book by a single page as if wondering what to do with it.

Hunter Taylor Stagg (1895-1960) was a writer, book reviewer and book collector. He was born in Richmond in 1895. As a child he lived at 912 W. Franklin St. which is now part of VCU's Monroe Park Campus and is called Stagg House. In 1921 he joined with three other young Richmonders to establish The Reviewer, a literary magazine. It was one of the first of its kind in the south and published in Richmond until October of 1924.

"Hunter Stagg was an avid literary lionizer, the one of the four [editors of The Reviewer] who sought meetings with writers for the thrill of associating with creative artists. His handsome appearance, his considerable charm, his genuine appreciation for writing aided him in establishing the friendships he cherished including that of [James Branch] Cabell.  Carl Van Vechten, leader of avant-garde cultural circles in New York, responded to Hunter's appeal and opened literary doors for him." - Edgar MacDonald, from the Ellen Glasgow Newsletter, number 15, October, 1981.

Stagg held several book reviewing positions in Richmond before moving to Washington, D.C. in 1938 to live with his sister, Helen Winston, and her family. He later managed a bookstore there. He worked intermittently throughout his life. Chronically without funds, Stagg forfeited a portion of his library and his furnishings when he did not meet storage payments. He was eventually committed to St. Elizabeth's in Washington, D.C. and died there in 1960. He was buried in the Stagg family section of Hollywood Cemetery in Richmond.

Stagg's remaining 1,100 volumes of his personal library and his papers, manuscripts and correspondence with writers as diverse as Ellen Glasgow, Langston Hughes, and Gertrude Stein, were acquired by Special Collections and Archives in the 1980s. 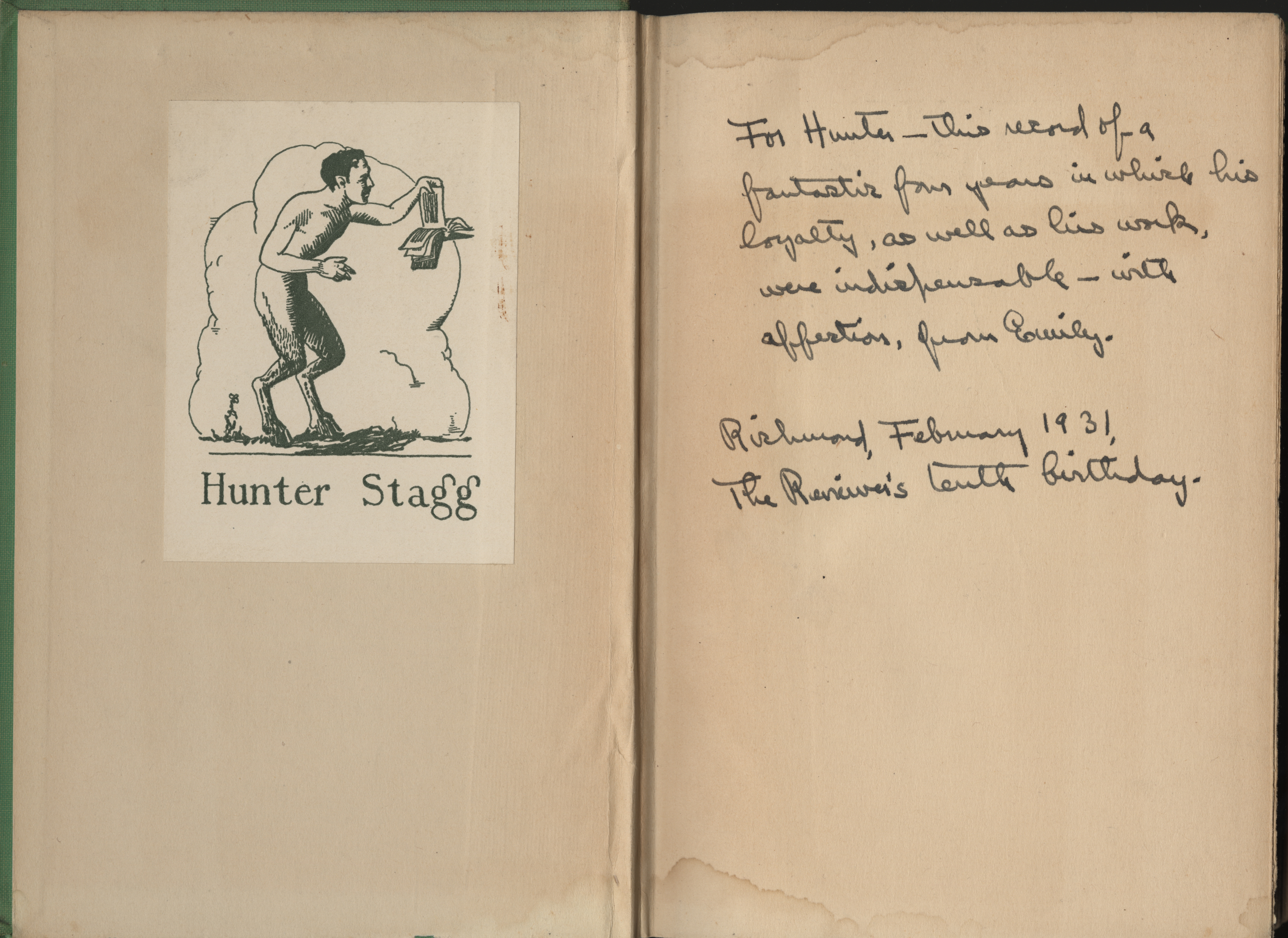 Emily Clark Balch (ca. 1890-1953) was a writer and promoter of Southern literature. Along with Hunter Stagg, she was one of the founding editors of The Reviewer (1921-1924) and its chief promoter. She grew up in Richmond where her father served as Rector of St. James Episcopal Church. She attended the exclusive Virginia Randolph Ellett School (today's St. Catherine's). In 1931 she published her account of the history of The Reviewer in Innocence Abroad. It detailed the ups and downs of the journal's story with essays on its numerous writers and editors. This copy was part of Stagg's personal library and is inscribed by her to him:

"For Hunter - This record of a fantastic four years of which his loyalty,

as well of his work, were indiscernible - with affection, from Emily, 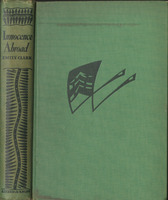 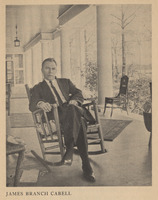 Image of James Branch Cabell from the chapter on Cabell from Innocence Abroad by Emily Clark, 1931. 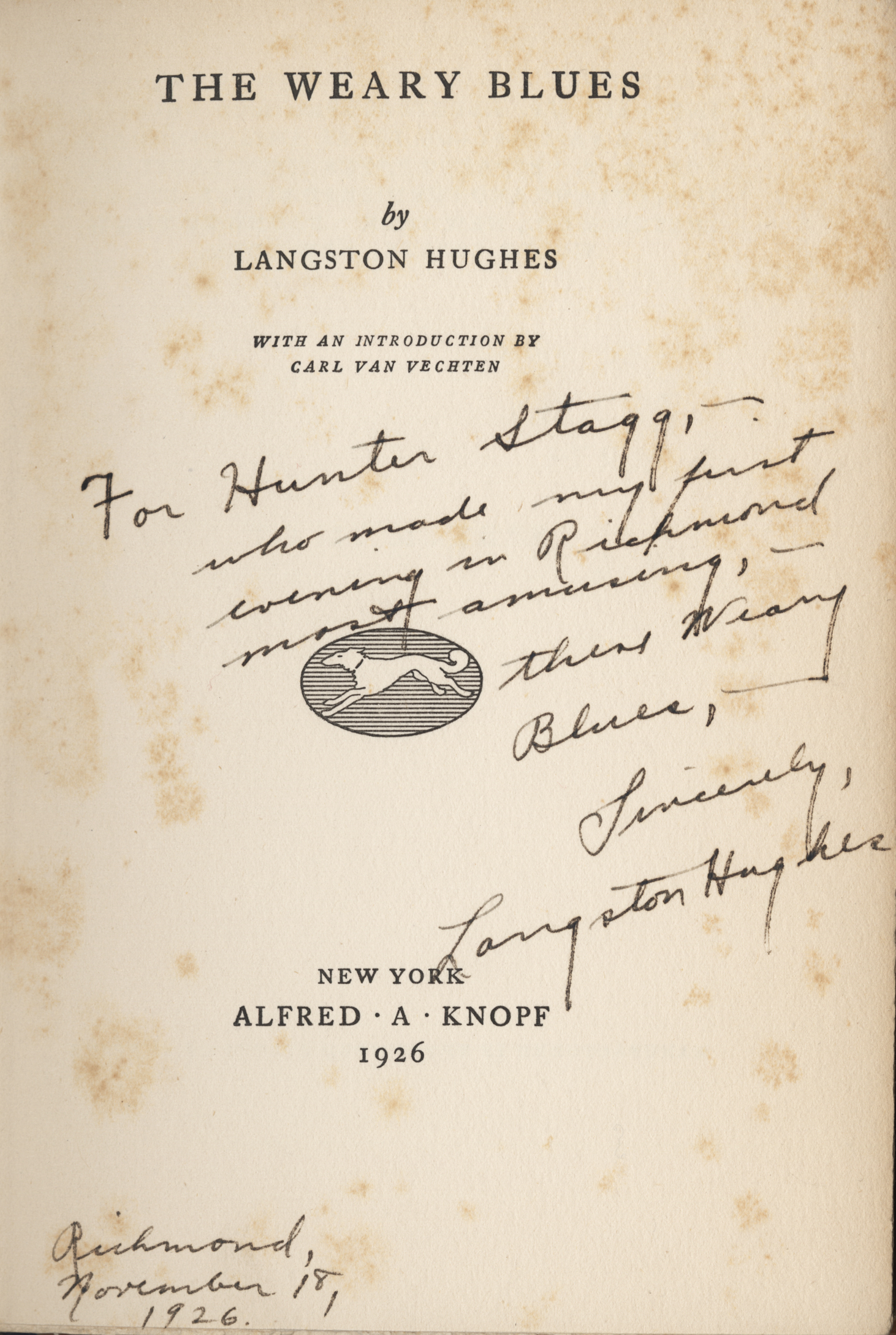 Inscription by Langston Hughes in Hunter Stagg's copy of The Weary Blues, 1926.

Langston Hughes (1902-1967) visited Richmond in November of 1926 to give his first reading in the south at Virginia Union University. The reading was held Friday, November 19, 1926. The night before he attended a party at Hunter Stagg's apartment, 2301 Park Avenue. Hughes and Stagg's meeting in Richmond was arranged by Carl Van Vechten (1880-1964), a writer and photographer who was an avid promoter of the Harlem Renaissance. He was a friend of both Hunter Stagg and James Branch Cabell. Van Vecthen lived in New York City but visited Richmond often in the 1920s.

The inter-racial party was quite daring for 1920s Richmond. Stagg wrote his friend and fellow book collector Montgomery Evans II (1901-1954) about the event, "If Thursday evening in my library can by any stretch of imagination be called a party, it should go down in history as the first purely social affair given by a white for a Negro in the Ancient and Honorable Commonwealth of Virginia." [A copy of the letter is housed in Stagg's papers held at VCU Libraries.] Langston Hughes recalled that Stagg made "Hard Daddy" cocktails (named after one of Langston's blues poems) of whiskey, lemon juice, maple syrup and ice.

Stagg would write favorably of Hughes in his Richmond News Leader literary column published on March 21, 1927. Stagg wrote that Hughes' work should be recognized as the "authentic artistic expression of something in human nature, we are not quite prepared to say what, only that we are sure it is something very real."

One can read more about Langston Hughes' visit to Richmond HERE. 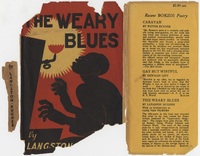 Front of dust jacket, The Weary Blues by Langston Hughes, 1926. 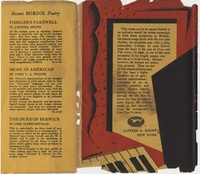 Back of dust jacket, The Weary Blues by Langston Hughes, 1926. 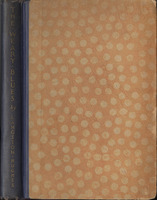 Spine and Front cover, The Weary Blues by Langston Hughes, 1926.

Inscription to Hunter Stagg by Carl Van Vechten, The Weary Blues by Langston Hughes, 1926. The collection of poems includes an introduction by Van Vechten. 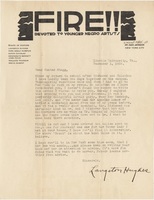 Letter to Hunter Stagg from Langston Hughes which was once in an envelope that had been pasted into Stagg's copy of The Weary Blues by Langston Hughes, 1926. The letter appears on Fire!! magazine stationary. Fire!! was an African American literary magazine published in Harlem in 1926. Only one issue was published.

Hunter Stagg had a large personal library that may have at one time numbered at least 2,000 volumes. Many of his books were sold to pay for the storage costs of his library. Special Collections and Archives has nearly 1,100 volumes of his remaining library.

Book collectors have to clean and maintain their books. Stagg owned this item: The Care and Feeding of Books which is a book repair kit. It is contained in a wooden box bound in dark red leather with gold lettering. Among the contents of the box is a tube of liquid cement, erasers, sponge, and a fluid for cleaning and preserving leather. This item is housed with his manuscript collection.

Hunter Stagg owned this book repair kit, The Care and Feeding of Books, 1950. It is part of his personal papers.

Here are the contents of Stagg's copy of The Care and Feeding of Books, 1950.