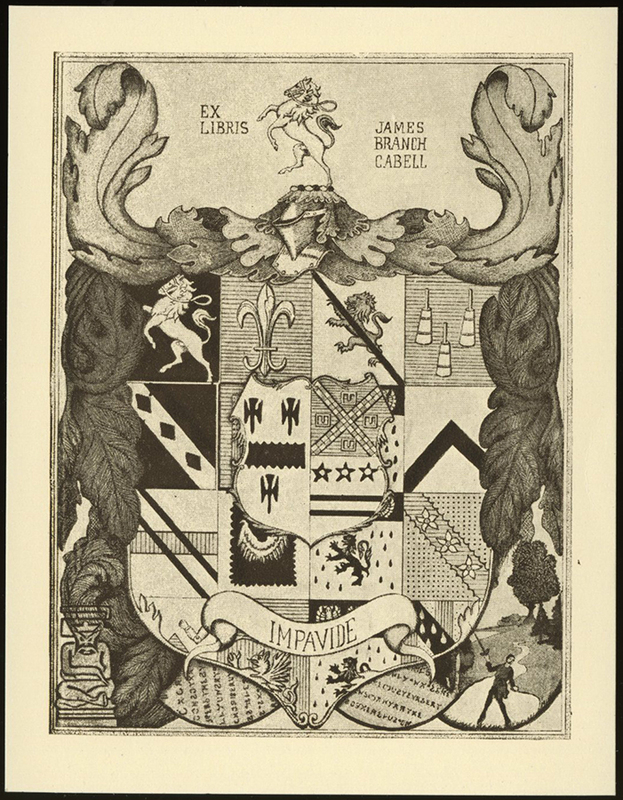 Richmond native James Branch Cabell was a writer of fantasy fiction. He is best known for Jurgen, A Comedy of Justice, published in 1919, which was part of a series of satirical works he authored that took place in a medieval fantasy world he called "Poictesme." Jurgen was banned in New York where it was published over obscenity charges. A trial two years later cleared him of those charges but the controversy brought him literary fame. His work was popular throughout the 1920s. Cabell authored 52 volumes of fiction and non-fiction in his lifetime. Learn more about the author's life and work by visiting James Branch Cabell: Man of Letters and Libraries.

Cabell had a large personal library numbering nearly 3,000 volumes. Ten years after his death his family donated his library and its contents to the new library that was being planned and built by Virginia Commonwealth University on its Monroe Park campus. That new university library would also bare his name. Cabell's books served as the basis of the rare book collection housed by the James Branch Cabell Library's Special Collections and Archives department. His books are housed in the Cabell Room which is adjacent to Special Collections and Archives.

While many of the books in Cabell's library contain inscriptions by their authors, his library was made even more personal by the items he kept in many of the books. Correspondence, photographs, newspaper clippings, assorted documents and ephemera were placed by Cabell in books associated with those materials. For instance, in his copy of The Springs of Virginia; Life, Love and Death at the Waters, 1775-1900 by Perceval Reniers, 1941, Cabell placed a two-page letter he had written as a young child visiting Allegany Springs to his grandfather. His books and their contents were cataloged before they were moved to VCU's Monroe Park Campus. Each book and the materials kept by Cabell in those books were given a specific catalog number. Materials removed from his library and placed in his personal papers retain those specific numbers. So today we could, in theory, recreate his personal library and their original contents.

Life on the Mississippi by Mark Twain, 1883.

This book was originally owned by George B. McAdams (Cabell's uncle by marriage). He and his wife, Sallie Branch McAdams lived at the Branch family house at 101 E. Franklin St. This was the same house where James Branch Cabell was born in 1879. By the early 1890s George and Sallie McAdams lived at 914 W. Franklin Street which is now owned by VCU and is called "McAdams House." 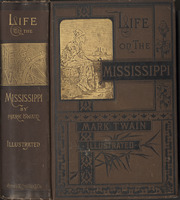 Spine and cover, Life on the Mississippi by Mark Twain, 1883. 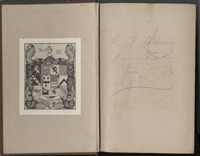 Bookplate of James Branch Cabell on inside of front cover and inscription on flyleaf: "Geo. R. McAdams [Cabell's uncle], 101 E. Franklin St., June 1st" from Life on the Mississippi by Mark Twain, 1883. 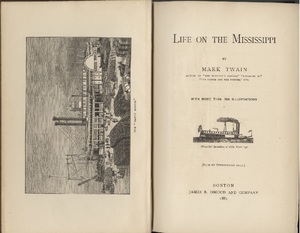 Illustration on frontpiece and title page, Life on the Mississippi by Mark Twain, 1883.

As a child and young adult, James Branch Cabell spent many weeks vacationing at the springs of Virginia. Rockbridge Alum Springs in Rockbridge County, Virginia were a favorite destination for wealthy Richmonders in the late 19th and early 20th century. In his copy of The Springs of Virginia, Cabell kept a copy of a letter he had written his grandfather from that location.

Inscription to James Branch Cabell by author, The Springs of Virginia; Life, Love and Death at the Waters, 1775-1900 by Perceval Reniers, 1941. 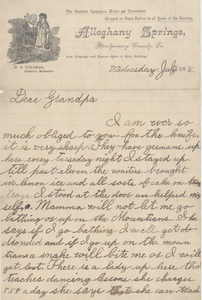 Something About Eve; A Comedy of Fig-Leaves 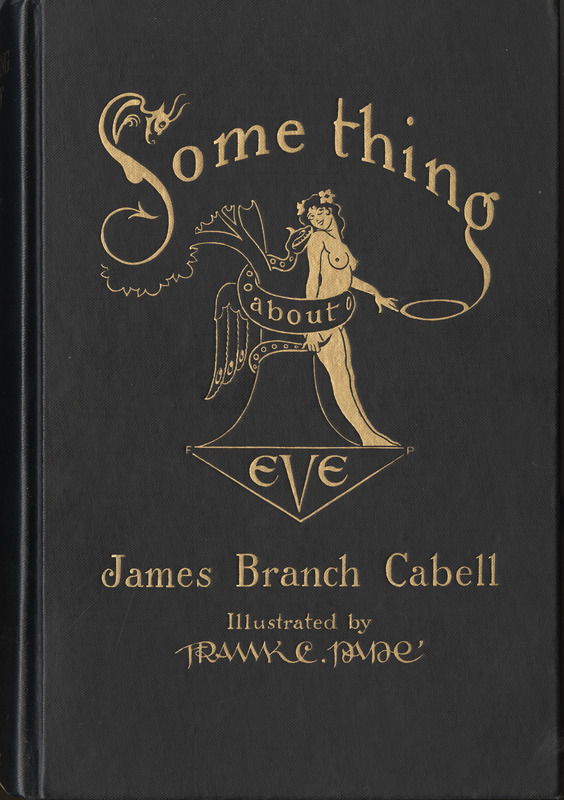 Cover, Something About Eve; A Comedy of Fig-leaves by James Branch Cabell, 1929 illustrated edition.

Frank C. Papé (1878-1972) was an English artist and book illustrator. His illustrations for James Branch Cabell's books in the 1920s published by the English publishing firm The Bodley Head were instrumental to him receiving more book commissions. His illustrations often paralleled Cabell's racy double entendres. Like Cabell, his career faltered in the 1930s.

Dust jacket, Something About Eve; A Comedy of Fig-leaves by James Branch Cabell, 1929 illustrated edition. 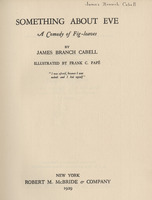 Title page, Something About Eve; A Comedy of Fig-leaves by James Branch Cabell, 1929 illustrated edition. Signed by Cabell.

Illustration by Frank C. Papé from Something About Eve; A Comedy of Fig-leaves by James Branch Cabell, 1929 illustrated edition.

Illustration by Frank C. Papé on page 39, Something About Eve; A Comedy of Fig-leaves by James Branch Cabell, 1929 illustrated edition. 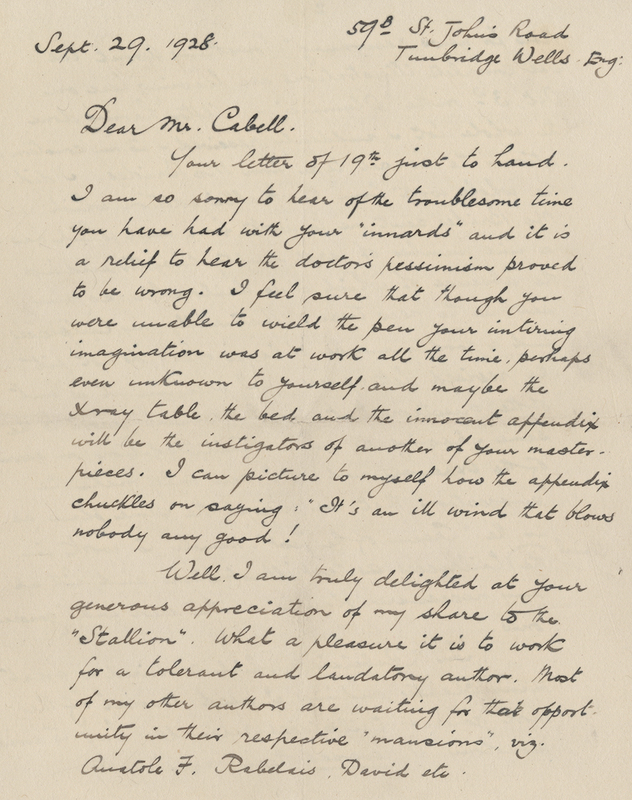 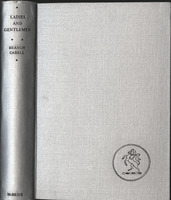 Spine and front cover, Ladies and Gentlemen: A Parcel of Reconsiderations by Branch Cabell, 1934.

Letter from the writer and critic H. L. Mencken (1880-1956) to James Branch Cabell originally placed in Cabell's copy of Ladies and Gentlemen: A Parcel of Reconsiderations by Branch Cabell, 1934. Branch Cabell is the name he used when publishig books during the 1930s.

Mencken was a friend and long time literary supporter of Cabell. In this letter Mencken must be responding to an inquiry by Cabell regarding what specific word to use for "sex." There is a sentence in In Ladies and Gentlemen: A Parcel of Reconsiderations that uses the words "love," "sex," and "coition" in reference to how those words were used by a former editor of Cabell's. 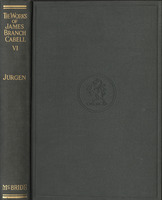 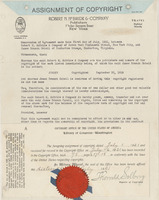 Assignment of Copyright for Jurgen, July 6, 1921 which Cabell had kept in his copy of Jurgen [Storisende edition, vol. 6] by James Branch Cabell, 1927.