"Our schools and colleges do not adequately meet the need for information and clarification, for training in the techniques and procedures of democracy, and for preparation for the role of citizen. Concerned chiefly with academic and vocational instruction, they do not provide the means to translate available curricula in the humanities into concrete training for living and participating in the democratic process.

If learned at all, citizenship is a by-product, relegated usually to the extra-curricular sphere and to the process of trial and error. Where the effort actually is made to teach it, often it becomes a hollow and meaningless civics: the structure and mechanics of community and governmental organization are stressed; historic social forces are neglected and the role, responsibilities and potential of the individual or his organizations are ignored.

THE RESULT IS APATHY

The individual...receives no training to overcome his feelings of confusion and helplessness as a citizen."

"A citizenship to meet the challenge of the difficult years ahead must be clear in ideas, strong in understanding, and convinced of the democratic way of life. It must be educated in politics, economics, and international relations, as well as in ethical values"

Farmers and workers and students joined as one
Marching on for a new world has begun.
All races, creeds, unite in a powerful steel band to clasp each other’s faith, each other’s hand
Our credo is democracy for all and to fight for fascism’s fall.
We sing aloud America’s new song---United in faith we must be strong!!

“It has been said that the forces at work in public affairs are beyond our control; the immensity of the problems confronting society appear so overwhelming as to make any action on the part of individuals seem inadequate. But the solution of these manifold problems—and indeed survival itself—requires the utilization in public life of the energies, wisdom, and knowledge of each of us.”

"The objectives for 1987 are the same as in years past. They are to teach participants to form and run their own democratic community; to dispel ethnic, cultural, and sexual stereotypes; to understand the social issues of our time; to provide needed assistance to local community agencies; and to encourage the development of critical thinking and leadership skills."

"The Encampment has been an effective pioneering project in citizenship education for seventeen years. In that time it has helped train people for all walks of American life. Our government, and now the Peace Corp, have reaped the harvest of your work.

It is a pleasure to commend the Encampment for its past work and look forward with you to major task that lies ahead not only for those who have the responsibility for running the Encampment, but for your alumni as they carry out the lessons learned at the Encampment." 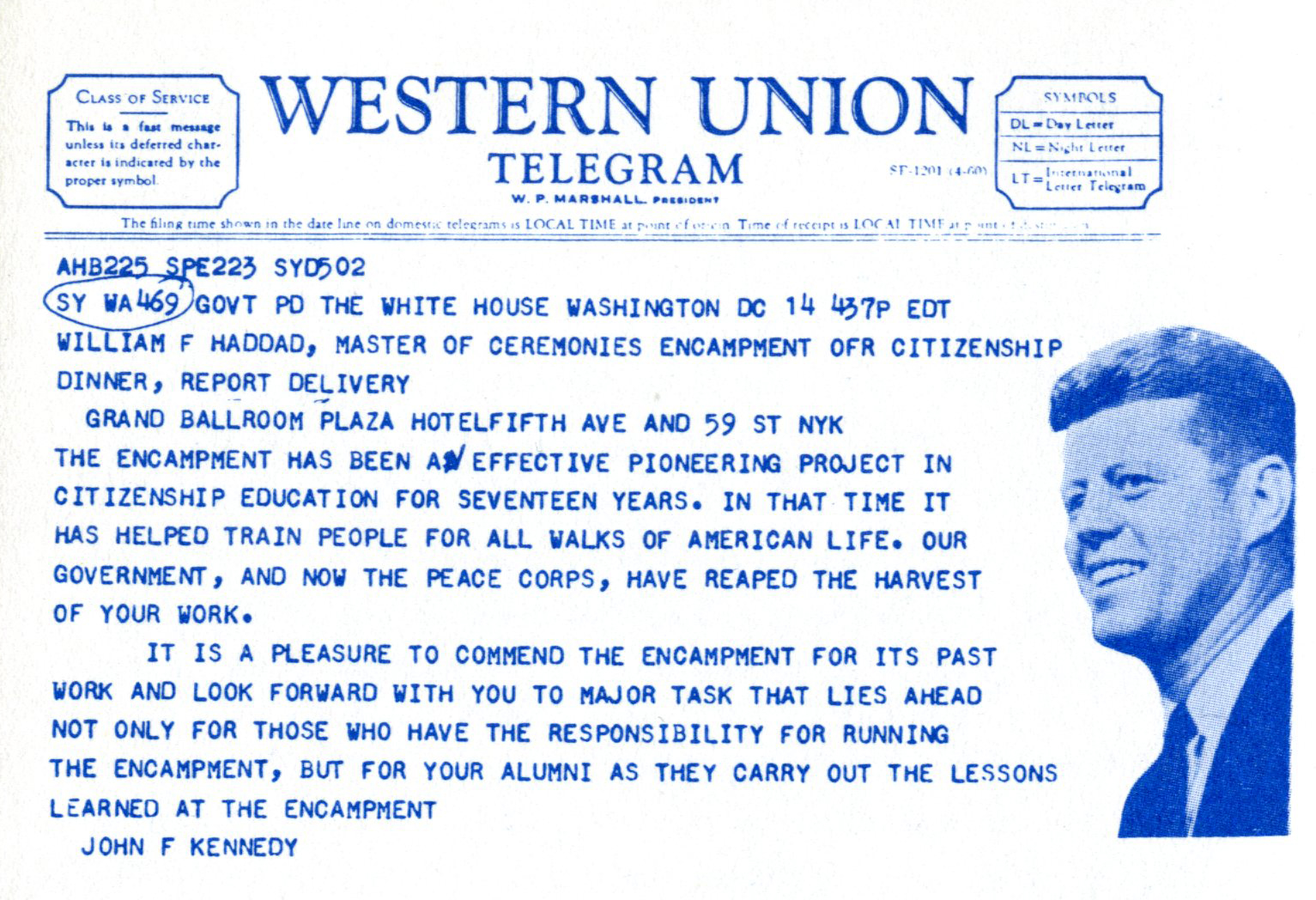