It could be argued that composition is the most important consideration for a comic artist. Comic artists have to think collectively about the interplay between multiple panels on a single page when crafting a narrative. Each panel is like a small snapshot of the story’s action. A panel must function as a part of the whole while also remaining semi-independent. The typical way that comics are arranged is as a series of these interconnected panels on a grid. Blank space called “gutters” are placed between each panel to visually separate the action that occurs in one from the next. Many comics stagger the panels slightly so that the gutters fail to link up and create vertical divisions down the entirety of the comic page.

While a grid layout is the norm, it is by no means the only way that comics can be arranged. As long as there are visual cues to lead readers from one part of the narrative to the next, the rest is up to the imagination of the artist. Spirals, bisected pages, tondi, and even collages have been used as comic layouts. Each layout has its own challenges, and it is up to the artist to choose the one that best serves the story they wish to tell.

In well-crafted comics, a single panel can stand on its own even without the full context of the larger story because it contains the visual principles of art. Balance, emphasis, movement, proportion, repetition, pattern, rhythm, unity, and variety are nine principles that artists use when constructing a work. Movement, repetition and emphasis are particularly important in comics. As the name suggests, movement refers to the path a viewer’s eye takes through the work. It is the visual “flow” of a piece. This flow is highly important in narrative art, as the ease of movement across the various panels directly relates to the viewer’s ability to follow along with the storyline.

Repetition goes hand in hand with movement, because it is one of the best ways to show “physical” movements in comic characters. A set of long dashes behind a figure with feet extended off the ground can represent running, slanted lines across the entirety of a page can stand in as rain, and so on. Repetition is not just about action though. It can also mean the recurring appearance of a certain character, a certain type of outfit, or a line of dialogue. Repetition creates catchphrases and iconic characters that viewers can point to and recognize from repeated actions or symbols. Superman always wears an “s”, Batman has his cowl, and Charlie Brown says “Good Grief”. Through repetition, comic creators define their character’s personalities, and appearances.

To draw readers’ attention to these repeated elements, artists often use emphasis. Emphasis in art is what creates the focal point of the work. By changing the shape, color, size, or texture of an element in an image, the artist sets that element apart from the rest of the work. This point of interest is typically what the action in the image revolves around. All points of the image should move towards this element as it is the most important for the viewer to see.

Next time you pick up a comic, take a look for these elements inside. You’ll be surprised at just how easy they are to see once you’re looking for them.

Click on the images below for more information about layouts! 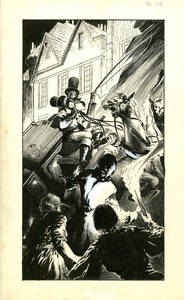 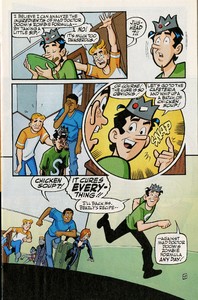 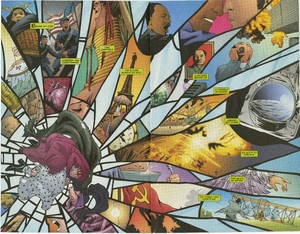