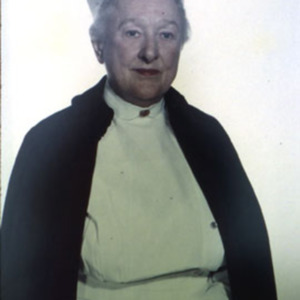 Throughout her long and distinguished career at Winchester Memorial Hospital, Mary Jane McCone consistently exhibited a "passion for nursing and a high standard of professional care." She was instrumental in reopening the School of Nursing at Winchester in 1937 following several years of closure during the Great Depression. As a farsighted nurse educator, she recognized the need to move the School of Nursing into an academic setting and worked to phase out the hospital school when Shenandoah University initiated its associate degree in nursing program in the 1960s.

"Mary Jane McCone symbolized the professional nurse, from her starched white uniforms to her service on the State Board of Nursing Examiners ... No nurse ever worked for her, or with her, who did not express their love and devotion to her. She was the nurse's nurse."

Mary Jane McCone was born in San Francisco, California in 1899 to James F. McCone, a physician and his wife Ellen Lennan McCone. In a 1983 interview in the Winchester Star, McCone related that "her father had a nurse's uniform made for her at the age of three." This early introduction to nursing may be the basis of her distinguished career, both at Winchester Memorial Hospital and during her military service in World War II. McCone attended school in San Francisco and completed her studies at Miss Burke's Finishing School in 1918. Following her graduation McCone traveled and engaged in activities enjoyed by upper middle-class young ladies of the 1920s. It is known that she visited in the home of Dr. Hunter McGuire, II a physician on the staff of Winchester Memorial Hospital, in Virginia. This visit may have led her to choose to become a nurse and to attend the School of Nursing there. She enrolled in the Winchester Memorial Hospital School of Nursing in 1927 and graduated three years later. She continued her education in Baltimore where she completed post graduate work in operating room technique and management. She used the skills and knowledge acquired there in her early employment at Johns Hopkins Hospital and San Francisco Hospital from 1931 to 1935.

McCone returned to Winchester in 1935 at the request of Dr. McGuire to become the superintendent (later director) of nursing for Winchester Memorial Hospital. Her varied duties included circulating in the operating room and administering anesthesia. The economic conditions of the Great Depression forced the closing School of Nursing at Winchester in 1934. Three years later in 1937 McCone worked with the hospital administration to reopen the school and the next class was admitted in 1938. McCone was named director of the school in addition to her position as director of nursing for the hospital.

On 2 July 1942, McCone entered the United States Army Nurse Corps and was assigned to the 8th Evacuation Hospital, a unit associated with personnel form the University of Virginia. After several months in the United States, McCone arrived in Casablanca, Morocco. This was the beginning of three years of campaigns that took her from North Africa to Germany with the Seventh Army. She moved with her hospital 72 times within nine months of continuous fighting providing support for the campaigns at Salerno, Anzio, Rome, the invasion of Southern France, and the southern front of the Battle of the Bulge. In the spring of 1945 she traveled with the Seventh Army from Munich, through southern Germany and the Benner Pass to North Italy. May of 1945 found her in Munich, then she went through Germany back into Northern Italy. During her military career McCone rose to the rank of major, earned three bronze battle stars and a Bronze Star for Merit Achievement for her development of a transport box to carry supplies as the army field hospital moved from one site to another.

McCone returned to civilian life and to her positions at the Winchester Memorial Hospital in 1946. Like other nurse educators McCone had to address the issues facing nursing education programs in the decade following World War II. In this timeframe many university affiliated hospital-based programs were retired in favor of baccalaureate programs embedded within the university. At the same time the profession began to develop a number of two-year nursing programs with most based at junior and community colleges. Anticipating some of the changes in nursing education McCone and others from Winchester Hospital administration began exploring with Shenandoah College (now Shenandoah University) administrators, the establishment of such a program at the college. After careful study, the hospital's School of Nursing was closed when the last students graduated in 1964. Shenandoah College opened its associate degree program prior to that in order to assure a continuous supply of nurses in the community. McCone continued her support of the program. She also encouraged the development of the Dowell J. Howard School of Practical Nursing, begun as a cooperative program with the county school systems and Winchester Memorial Hospital.

In 1949, McCone was appointed by the Governor of Virginia to fill an unexpired term as a member of the Virginia State Board of Nurse Examiners (now the Virginia Board of Nursing.) The following year she was reappointed for a full five-year period ending in 1955, during which she served as president of the Board for three years.

McCone continued as director of nursing at Winchester Memorial until her retirement in 1968 after thirty six years of distinguished service. She was recognized for her "unrelenting standards of excellence in nursing practice and nursing service" both during her military service and at Winchester. The Graduate Nurses Association (now the Virginia Nurses Association) presented McCone with its most distinguished award, the Nancy Vance Pin in 1952. Shenandoah College established an award to honor McCone in 1980 to recognize her passion for nursing and high standards of professional care. The Mary Jane McCone Award for Practice Excellence has been presented continuously since that time. In 1990, Rear Admiral O. Marie Henry, DNS, RN, FAAN, established a Chief Nurse Award that continues to be presented by the United States Public Health Service. The first Chief Nurse Award was presented to Mary Jane McCone.

McCone was active in professional nursing organizations throughout her career. In retirement she worked to support Fellowship in Serving Humanity Charities (F.I.S.H), an organization with 1000 groups worldwide dedicated to helping others. She also enjoyed gardening. McCone died in 1992 in Boyce, Virginia.