Explore each of these items documenting the Lewin family's escape from Hamburg, Germany from October to December of 1938. Of the half a million Jews who were living in Germany when Hitler took power, about 300,000 managed to emigrate before the Nazi program of genocide began.

Abraham Jakob Lewin, or Adolf as he preferred to be called, was born in Thorn, Poland in 1886. His family moved to Germany where he married Jenny Wally Birstein. While living in Hamburg where Adolf owned a tobacco shop, the couple had four children: Hans, Rachel Esther, Ruth, and Hanna Lea. At the urging of Adolf's brother Bernard and following the events of Kristallnacht, the family fled Germany. Due to the complexity of immigration quotas and the fact that Adolf had been born in Poland, not all the Lewins were able to obtain immigration visas to the United States at once. Consequently, they first traveled to El Salvador to stay with Adolf's brother Martin. Eventually the entire family received visas and was able to move to America. They settled in Los Angeles where Jenny and the children were sponsored by Adolf's brother Bernard.

Hanna Lea Lewin was 21 when she and her family escaped Nazi Germany. She would later marry Harry Hans Schiffman, a Holocaust survivor, and live in Richmond, Virginia. It is through her generosity that these documents came to Virginia Commonwealth University Libraries so that they might be available to students and researchers.

VCU Libraries Special Collections and Archives would also like to express our appreciation to Mrs. Helen Schiffman Hinshaw for sharing additional information about her grandparents and for allowing us to include the Lewin family portrait in this exhibit. 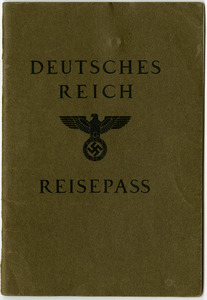 Deutschesreich Reisepass issued to Abraham Jakob Lewin at the German consulate in San Salvador, May 10, 1939 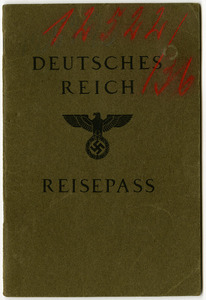 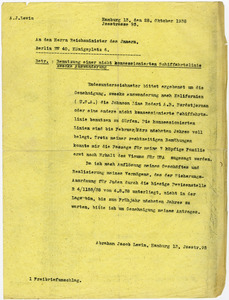 Request for permission to book passage on Johnson Line or other ship lacking official authorization. Letter states that the authorized (konzessionierte) lines are completely booked until February/March of 1939. In the second paragraph Lewin says he cannot wait until the spring of 1939 to leave, following the dissolution of his business and liquidation of his assets. 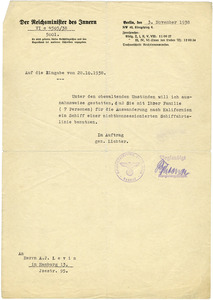 Letter granting "exceptional" (ausnahmsweise) permission for Lewin family (7 members) to use a non-authorized shipping line to emigrate to California. This authorization refers to Abraham J. Lewin's request of October 28, 1938.