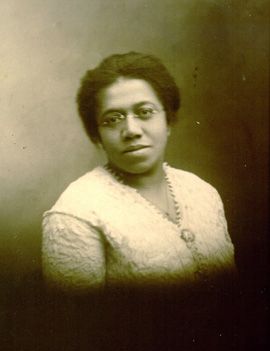 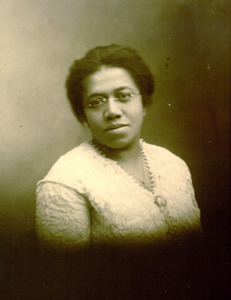 "Miss Sharp is one of the best known school nurses in Virginia."

Highlights:
Birth Date: 1881-11-01
Birthplace: Saltville, Virginia
Death Date: 1967-04-12
Death Place: Petersburg, Virginia
Education:
Nursing CV:
Biographical Text: Carrie Marie Sharp, a role model for African American nurses, was an active participant in professional nursing organizations and set a standard for generations to follow. In 1914, Sharp was elected president of the National Association of Colored Graduate Nurses (NACGN). She was also appointed to be a delegate to the 1915 International Council of Nurses meeting. However, the Council did not meet because of World War I.

She became a national organizer for the NACGN in 1915. Sharp assembled a small group of nurses in Petersburg for the purpose of forming an organization, the State Association of Colored Graduate Nurses. The organization elected her as the first president and she subsequently held the office of corresponding secretary and treasurer. Sharp served on an advisory committee with the eleven other presidents. In 1932 she was honored by being named "Treasurer for Life or as long as she was eligible." At her suggestion the name of the organization was changed in 1936 to the Old Dominion Graduate Nurses Association (ODGNA). At the annual meeting of the ODGNA on June 14, 1949, Sharp received a scroll inscribed with the following: "presented in recognition of your true leadership, devotion and faithfulness."

Adah Thoms in her 1929 book, The Pathfinders, described Sharp as "one of he best known school nurses in Virginia" and states that she had been associated with the school system in Petersburg for many years. Sharp was committed to her work with children. Her family remembers her as "a strong matriarch for many brothers, sisters, nieces, nephews, grand nieces and grand nephews."

Anecdotal reports showed that she was a Girl Scout Leader and encouraged and enlisted a large number of African American girls in the troop that she led over a number of years. A building at Camp Holly Dell in Chesterfield County, Virginia, (once a camp for Girl Scouts) bore her name. According to the Commonwealth Council of the Girl Scouts, a "Carrie Sharp Unit" was among the five structures listed at the camp and was described as a large house that served as the camp directors building.
VCU Libraries Gallery
Tags: Class of 2001
Citation: “Carrie Marie Sharp,” VCU Libraries Gallery, accessed December 3, 2022, https://gallery.library.vcu.edu/items/show/77976.