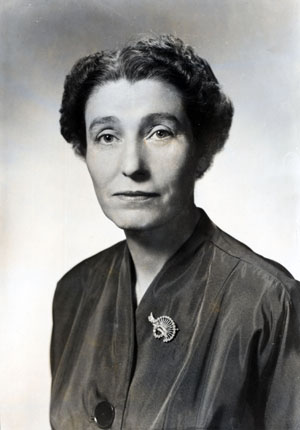 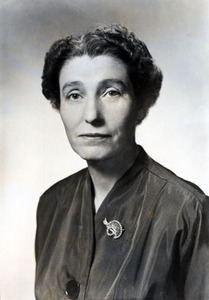 Mabel E. Montgomery, an outstanding educator and administrator, was the third of a triumvirate of leaders who served as Secretary-Treasurer of the Virginia Board of Examiners of Nurses for fifty years beginning in 1920. Following in the footsteps of Ethel Smith and Josephine McLeod, Montgomery made her mark on Virginia nursing through her work with the Board of Examiners. She has the distinction of serving as a member of the Board for almost thirty years, longer than any other person. In 1970 with the reenactment of the Virginia Nurse Practice Act, she became the first Executive Secretary for the renamed Virginia State Board of Nursing.

"[Mabel Montgomery] is held in the highest esteem not only by her colleagues but also by those in allied health groups. A person who is extremely knowledgeable in nursing, she has many personal attributes that make her a valued friend and co-worker--a sharp, retentive memory and recall, keen insight, and perceptual acuity, superior directive and managerial ability, an unusual sense of humor, empathy and sympathy, high standards and unquestioned integrity.

Highlights:
Birth Date: 1902-11-08
Birthplace: Dexter, Missouri
Death Date: 1989-06-06
Death Place: Richmond, Virginia
Education:
Nursing CV:
Biographical Text: Mabel E. Montgomery completed one year of college at Southeast Missouri State Teachers College and taught school before entering the St. Louis City Hospital School of Nursing in St. Louis. After earning her diploma, she spent three years as an instructor at St. Louis City Hospital before heading to New York where she obtain a Bachelor of Science degree in nursing education from Teachers College, Columbia University. She continued to work in nursing education at a school of nursing in St. Louis before accepting a position as Educational Director for the Missouri State Board of Nurse Examiners. During this time, she completed the work for her master's degree in educational sociology in 1937 from Columbia. In 1938 she moved to Virginia to accept a position in the school of nursing at the University of Virginia and stayed there until 1941 when she became Director of Nurses and of the School of Nursing at Stuart Circle Hospital in Richmond. In 1941, the Governor of Virginia appointed Montgomery to a five-year term as a member of the Virginia State Board of Examiners of Nurses. She was not reappointed at the end of that term in 1946. However, she was reappointed within a few months to fill an unexpired term. Montgomery served as president of the Board and, in 1948, following the death of Josephine McLeod, she was elected by the members of the Board to be Secretary-Treasurer. In addition to being a member of the Board, she was a full-time employee and administrative officer. She continued in this position until June 30, 1970.

Over the years, Montgomery was active in a number of organizations. She served as president of both the Missouri and Virginia Leagues of Nursing Education. As a member of the Virginia Nurses Association, she served as a member of the Board of Directors and was a member or chairman of a number of committees. She served on two interesting special committees – one to study the subsidiary worker and the other was a committee for the formation of the Student Nurses Association of Virginia. In her capacity as administrative officer for the Board of Examiners of Nurses, she attended all meetings of the Virginia Nurses Association Board of Directors in a liaison role.

In 1954, Montgomery was elected second vice president of the American Nurses Association and became first vice president on the death of the incumbent the following year. During this same time she was the ANA Advisor to the National Student Nurses Association. While the nursing regulatory boards across the nation continued to meet together under the aegis of the American Nurses Association, Montgomery served as the Virginia delegate to the ANA Committee of State Boards of Nursing (later the ANA Council of State Boards of Nursing.) She served as chairman of several subcommittees of this group.

Montgomery was appointed to several councils and committees and served each with distinction including: the Advisory Council to the Licensed Practical Nurse Association of Virginia; the Governor's Committee on Nursing, where she served on the Executive Committee, the Virginia Comprehensive Health Planning Council, and the Governor of Virginia's Committee for the Employment of the Physically Handicapped; the Richmond Chapter of the American Red Cross; Altrusa International, serving as Vice Governor of District 3; the American Association of University Women, where she was vice president of the Virginia Division; and the Board of Directors of the Richmond Chapters of the American Heart Association and the American Cancer Society.

Throughout her tenure on the Board of Nursing, Montgomery emphasized the importance of strong educational programs that met or exceeded the standards set for approval by the Board. She also voiced her concern about the need for more and better qualified faculty members and advocated for the development of master's and doctoral programs in the Schools of Nursing in Virginia's colleges and universities. The Board established the position of Educational Director at Montgomery's urging and she employed the first person to hold that position. The first yearly programs on current topics in nursing education were sponsored by the Board and attended by faculty from across the state. Montgomery worked with representatives from the Department of Mental Health to assure the development of affiliations for schools of nursing in psychiatric nursing at both Eastern and Western State Hospitals. With the development of the Virginia Community College System, Montgomery cooperated with Chancellor Dana B. Hamel to implement the master plan for the associate degree nursing programs in the Commonwealth. She encouraged dialog between the various types of nursing education programs to promote the upward mobility for the graduates of those programs.

Montgomery used statistics on enrollments in professional and practical nursing programs to show that the growth in numbers of nurses was not keeping pace with the population changes and increasing needs for nursing services in the Commonwealth. She advocated increased funding to expand the larger, well-organized schools and emphasized the need for regional planning. In Montgomery's 1967 Annual Report to the Board, she outlined a number of issues that have dominated nursing over the last 40 years. She noted: "We further suggest that for long range planning for improving nursing services, the nursing leaders in the state working together with a minimum of emotional bias, give serious consideration to the following problems that must be resolved by the nursing profession: 1) Meaningful differentiation between the technically oriented and the professionally oriented nurse; 2) Goals of the respective curricula and expected competencies of the graduates of the two types of programs; 3) Means by which nursing service can accommodate the two distinctive types of practitioners in work orientation and work assignment in order that each type of practitioner may have opportunity to develop to her full potential; and 4) Interpretation to other nurses and to the public of the two types of nursing functions. This must be based on the respective preparation of the practitioners. It must be emphasized over and over that both types are useful, necessary and employable."

Montgomery over saw with the assistance of other staff and members of the Board, the implementation of two major revisions to the Nursing Practice Act. The first, in 1946, saw the adjustment to the licensure of practical nurses and establishment of the regulations and approvals for schools practical nursing. In the early 1960s the Virginia Nurses Association through its Committee on Legislation, chaired by Helena Gee, began to plan for another major change in the Nurse Practice Act. Montgomery worked tirelessly with the Committee on Legislation over the next several years to develop what eventually was a bill to repeal and reenact the section of the Code of Virginia related to nursing. Montgomery and Gee traveled across the state to inform nurses of the proposed changes and to seek their support and cooperation. When the bill was finally presented in 1970, it met with little opposition and was adopted with almost no change.

Montgomery devoted untold hour to implementing the changes in the 1970 law. The most difficult of these was the licensing of LPNs under the waiver provision of the new law. Approximately 1,000 individuals sought licensure through waiver, but less than fifty percent were successful. As a result the Board had to offer additional licensing examinations during this one-year period. Montgomery closed her final annual report to the board with an expression of appreciation to employers of nurses, the nurses licensed by the Board, and applicants for licensure for their cooperation during the time of change. She concluded with the commendation for "the fine office staff which has handled so nobly the greatly increased volume of work during the last six months of 1970."

By 1970 Montgomery was ready to retire, but decided to serve the Board during the major transition that occurred with the Nurse Practice Act of 1970 by accepting her appointment to be the first Executive Secretary for the Board of Nursing. She continued in the position for six months while a suitable successor could be located. True to form, Montgomery was involved in the search and recommended Eleanor J. Smith, the staff person assigned to the American Nurses Association Council of State Boards of Nursing and who had worked for the Boards in Maryland and Vermont for the position.

Montgomery received many honors at the time of her retirement in 1971. Approximately 300 people from across the Commonwealth came to Richmond for a farewell dinner in her honor hosted by the members of the Board. On two occasions, the Virginia Hospital Association formally recognized her service to the profession of nursing. Montgomery was the recipient of the prestigious Nancy Vance Pin Award presented by the Virginia Nurses Association in 1954 The Medical College of Virginia (now Virginia Commonwealth University) established two awards in her name, the first to recognize an outstanding nursing student or faculty member and the second presented by the Department of Nursing to acknowledge exceptional care by registered or licensed practical nurse.

A generation of nurses of Virginia viewed Mabel Montgomery as the Board of Nursing. Her name was signed to thousands of certificates of license issued during her tenure. Very few nurses knew the other members who served with her. She presented a stern, no nonsense appearance, but had a wonderful sense of humor and a great capacity for caring about others. At the Virginia Nurses Association Convention in Roanoke in 1969, VNA gave Montgomery a specially designed silver and gold pin in recognition of her "distinguished service." The group also added her name to those of Ethel Smith and Josephine McLeod and renamed its educational loan fund to honor all three women who served as Secretary-Treasurer of the Board between 1920 and 1970. This trust, the Smith-McLeod-Montgomery Fund, became the basis for the Virginia Nurses Foundation.
Bibliography: Writings by Mabel Elizabeth Montgomery