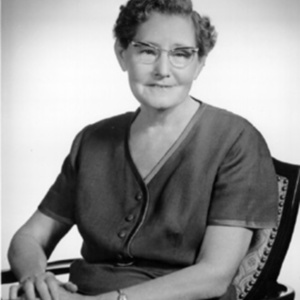 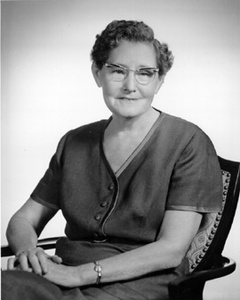 During World War I, Nora Spencer Hamner worked tirelessly to help people to be examined for tuberculosis while serving as a field nurse for 47 counties in Virginia. Under her leadership as Executive Secretary of the Richmond Area Tuberculosis Association, the first tuberculosis surveys of local industrial plants were developed and the first tuberculin testing was done. Hamner was instrumental in establishing an endowment for the Annual Nursing Lectureship of the Nursing Division of the Medical College of Virginia Alumni Association of Virginia Commonwealth University. The recipient of numerous local, state and national awards and citations for her untiring efforts in combating tuberculosis, Hamner was honored by the Virginia Tuberculosis Association in 1962 when an award was established in her name for persons making outstanding contributions to tuberculosis control.

"Her love of people, her sense of humor, her honesty and tolerance account for Nora Hamner's success."

Nora Spencer Hamner devoted 45 years to serving her fellow Virginians in the effort to defeat and control tuberculosis. Recognized as the first nurse in the Commonwealth trained in public health nursing, she served first in Darlington County, South Carolina then, for two years traveled the mountains and valleys of southwest Virginia. In a Model-T Ford, Hamner went to towns working with ministers, physicians and others to develop clinics for the diagnosis of tuberculosis. She did follow-up care and worked to convince patients to enter the sanitarium for treatment

In 1919, Hamner became the executive secretary of the Richmond Tuberculosis Association. She continued in this position until her retirement in 1962. In that position, she continued the fight against tuberculosis conducting clinics, giving talks, working with medical groups and with members of the Virginia General Assembly. She established and ran a summer camp for underprivileged youngsters in Richmond. She saw this as a way to combat "social blights" which led to disease. She played a large part in the development of rehabilitation programs at Pine Camp, the sanatorium for the city of Richmond.

Hamner was active in many organizations. She served as president of the Southern Tuberculosis Conference. She devoted many years to the work of the Virginia Nurses Association (VNA) and District 5 of the VNA. With the VNA she helped to establish the Agnes D. Randolph Fund for nurses with tuberculosis. This fund continues as one of the roots of the Virginia Nurses Foundation.

The Medical College of Virginia Alumni Association of Virginia Commonwealth University (MCVAA of VCU) benefited from Hamner's contributions as a member of its Board of Trustees. With another alumnus, she led a committee of the Nursing Division, MCVAA of VCU to raise the funds for the endowment of an annual nursing lectureship, known as the Mahoney-Hamner Nursing Alumni Lectureship.

Hamner was the first woman to serve on the Medical College of Virginia (MCV) Board of Visitors and its Executive Committee. She was the first nurse to participate in the annual symposium sponsored by the MCV when she presented a paper on the education of nurses during the 1925 commencement activities. In 1951, she received an honorary degree, the first presented to a woman by MCV. Other honors included: the Douglas Southall Freeman Award from the Virginia Tuberculosis Association, and a citation from the President of the United States for her work in recruiting nurses during World War II. The Virginia Tuberculosis Association established the Nora Spencer Hamner Award that continues to be given by the American Lung Association of Virginia. The first Nancy Vance Pin Award was presented to Hamner in 1942 by the Richmond Professional Institute for her outstanding work as a public health nurse. This award continues to be presented biannually by the Virginia Nurses Association.

With a number of brothers and sisters, Hamner's home in Richmond was open to the many nieces and nephews who came to Richmond to go to school. Her garden reflected her love of flowers. She was a nationally accredited flower show judge.

In 2000, the Virginia Nurses Association recognized Hamner as one of fifty-one Pioneer Nurses in Virginia.